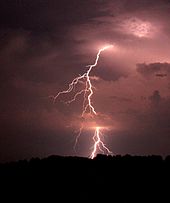 Patna: After claiming many lives and bringing chaos to many parts of Bihar this year, lightning has wreaked havoc in a new area — that of marriages.

A bride called off her marriage after the groom reportedly behaved awkwardly following a lightning strike during the course of their wedding. The incident took place at Chitrasenpur village, which falls under Sonepur police station in Saran district.

As per reports, a wedding party had arrived at the bride’s home on Wednesday night. After a ceremony in which garlands were exchanged, the wedding was solemnised in a joyous atmosphere, but a lightning strike right in the midst of the festivities spoiled everything soon.

Witnesses said hardly had the wedding rituals been completed when lightning struck, terrifying the groom so much that he began behaving peculiarly, leaving the guests stunned.

When the bride heard of the groom’s behaviour, she immediately cancelled the marriage and refused to leave with him. She remained adamant on her stand despite persistent appeals from the groom’s side.

Subsequently, the bride’s family asked the groom’s family to return the dowry given to them for the marriage, leading to bitter quarrels. The bride’s family reacted by holding hostage the members of the wedding procession. They were let off after the police reached the spot and intervened.