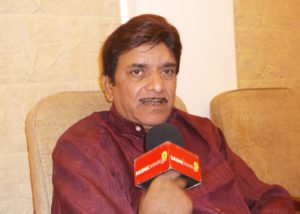 Noted Bhojpuri actor Kunal Singh, who has filed nomination for Patna Sahib seat as Congress candidate, on Tuesday said for all the respect he has for “elder brother” Shatrughan Sinha, he would make all efforts to win the electoral battle against him for the sake of different ideologies.

“Even fight between father and son is common for the sake of one’s values and ideology… I have respect for Shatrughanji but it (election) is a fight for ideologies of different parties we represent,” he told. Singh filed his nomination on Tuesday and was accompanied by state Congress chief Ashok Choudhary and other party leaders.

Son of former minister Budhadeb Singh, he is the joint candidate of Congress and Lalu Prasad’s RJD from Patna Sahib, which is represented presently by actor-politician Sinha. Singh, who has acted in around 100 of Bhojpuri films, said the contest will not be a “star war” but a “political war” and he would try to keep it graceful by desisting from throwing mud at either Sinha or other candidates.

“I will prefer to talk about real issues gripping Patna and efforts made so far to address them… People will judge whether the present MP has been able to fulfill their aspirations or somebody else like me, whose father has served them in the past should be given a chance,” he said.

Former Bihar minister and Aam Admi Party leader Parveen Amanullah and Gopal Prasad Sinha of JD(U) are also in the fray at Patna Sahib, where polls are slated for April 17.