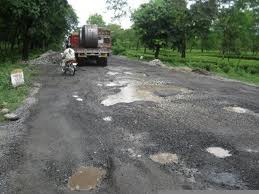 The Bihar government has come out with an innovative idea of deploying “Road Ambulance” across the state for immediate maintenance of damaged roads and providing immediate medical aid to distressed persons on roads.

Showing the prototype of the Ambulance to media persons, Amrit, who is also Managing Director of Bihar State Road Development Corporation (BSRDC), said a total of 76 such Ambulances would be criss-cross the state on 9064 km of state Highways and major district roads.

“We expect that all 76 Ambulances come to us for operation by March end,” he said.

The Ambulance would be on display for the first time at Republic Day function on January 26, he said.

The vehicle would be fitted with GPS system for effective monitoring of the movement of the vehicles, he added.

Amrit said the vehicle was part of commitment of the department for effective maintenance of roads in the state.

As per the new Road Maintenance policy, 2013, the private contractors have to maintain the quality of roads built by them.

The vehicle would have chain saw to clear road from fallen tress and branches a common factor in rainy season.

The Ambulance would have two strechers and first aid kit to adminster immediate relief to a traumatised perosn on road before rushing him to nearest hospital, Amrit said.

There would be “path mitra” on each vehicles for the task of maintenance of road.

Each vehicle fitted with siren and searchlights would cover a distance of 100 km.

The specially designed vehicle on the chasis of Ashok Leyland truck has been done by a Ghaziabad based company at a cost of Rs 25.90 lakh each under strict supervision of BSRDC Engineers.