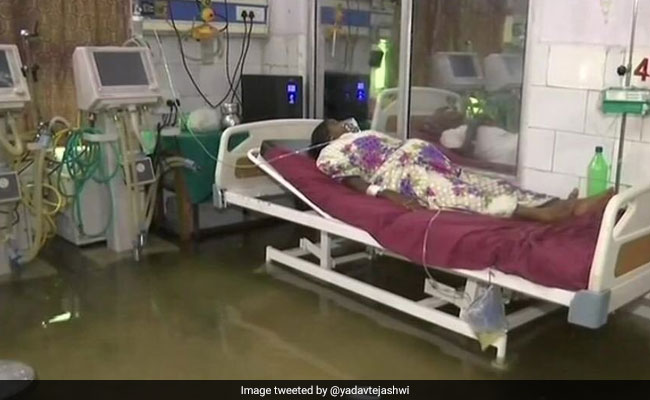 Patna: One of the largest hospitals in Bihar capital Patna has been flooded after a bout of heavy rains. The wards and corridors of Nalanda Medical College, which draws patients from across east Bihar, have turned into lakes. In the hospital’s Intensive care unit, where cleanliness is crucial, fish were seen swimming in the dirty water.

Photographs of the hospital were tweeted by opposition leader Tejaswi Yadav, with a scathing post that mocked Chief Minister Nitish Kumar.

“Bihar’s 2nd largest Hospital NMCH has turned into an aquarium that too filled with drain water. Hope the JD(U) doesn’t declare this a stunt by the Lord Indra. Even the Lord Indra is highlighting the wrong policies followed by the government for 14 years,” his tweet read.

Nitish Kumar’s model of development. ICU of NMCH is swimming in drain water, fishes seen in ICU. Mind you, you cant question Nitish Kumar as his conscience is fast asleep and snoring with BJP. https://t.co/XucX31lZvb

Around 2000 patients visit the Out-Patient Department of the Nalanda Medical College each day.

But today, the medical staff was struggling to provide care to the patients at the 750-bed hospital. Visuals from the wards showed beds sunk in knee-deep water. There were reports that several key electrical support machinery had to be shut down.

Tejashwi Yadav, however, got trolled for his tweet, with many pointing out that not so long ago, his elder brother Tej Pratap Yadav was the state’s health minister in the Grand Alliance government led by Nitish Kumar.

Others reminded that his father Lalu Yadav and mother Rabri Devi were at the helm of affairs in the state for more than a decade.

It has been raining continuously in Patna over the weekend and locals say the hospital, located in a low-lying area, gets flooded almost every monsoon.