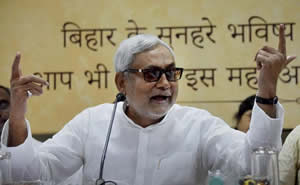 Bihar Chief Minister Nitish Kumar on Wednesday attributed the state’s ‘backwardness’ to the “discriminatory policies of the British”, and said the state is constantly making efforts to climb up the development ladder.

Nitish’s statement at a national seminar on ‘Veer Kuer Singh and the Revolt of 1857’ that marked the conclusion of three-day vijayotsav of the Bhojpur freedom fighter in Patna, comes in the backdrop of Niti Ayog CEO Amitabh Kant’s controversial remarks that “states like Bihar and Uttar Pradesh were keeping India backward, especially on social indicators”.

“The British discriminated with states like Bihar and we are still reaping its bitter fruit. It is a result of their biased policies that Bihar is still a backward state today,” the CM said.

Nitish, however, added that apart from seeking external help for state’s development (including demand for special category status), “we are working on our own too to bring around a progressive change in Bihar. Our annual budget today is of around Rs 1.80 lakh crore, a manifold increase from the Rs 20,000 crore budget till a few years back.”

Deputy CM Sushil Kumar Modi, too, had spoken on similar lines earlier when he said that following the 1857 mutiny, in which Veer Kuer Singh played a major role in Bihar, “the British made an unannounced policy to discriminate with states such as Bihar, Uttar Pradesh and West Bengal, and we had to bear the brunt of backwardness,”

The Bihar CM also cautioned the people of the state against the social media saying, “People write a lot of nonsense and improper things on social media platforms, which result in confusion and law and order issues.”