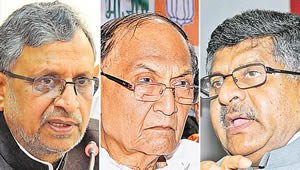 Despite Prime Minister Narendra Modi’s call for an end to caste-based politics in Bihar, a deep-rooted tussle in the BJP between upper caste and other backward caste (OBC) leaders, ahead of the assembly elections later this year, has put the saffron party in a dilemma.

Perhaps realising the problem, Modi and party president Amit Shah are taking steps to ensure that none of these leaders are allowed to dominate the public debate till the polls, fearing it may anger either of the group, causing a loss to the party’s social support base.

“The BJP in Bihar is a divided house. To project a leader from either the OBCs or the upper castes as a chief minister candidate would antagonise the other group. BJP is not in a position to project any one person against Nitish Kumar, who was declared the chief ministerial candidate by Janata Dal-United (JD-U), Rashtriya Janata Dal (RJD),Congress and National Congress Party (NCP) alliance,” a senior BJP leader, who did not want to be named, said.

Another BJP leader said on condition of anonymity, that the BJP was sure of its traditional base of upper castes remaining intact in Bihar. Its worry is to consolidate backward castes in view of RJD chief Lalu Prasad joining hands with chief minister Nitish Kumar.

“If BJP projects a backward caste leader as its face for the polls, it is bound to anger upper caste leaders who have been in the forefront of the party in good and bad days,” he said.

In the caste-ridden politics of the state, there are over half a dozen leaders from the upper castes and the backward castes who have staked their claim for being nominated as the chief ministerial candidate. “All of them are lobbying hard,” the BJP leader said.

Thakur, in his early 80s and a Rajya Sabha member, has repeatedly said in the last one month that he will be happy to be a chief ministerial candidate if party gives him this responsibility to him. Thakur belongs to the powerful landed upper caste Bhumihars, who are said to be overwhelmingly backing BJP in the post-Mandal politics in the state.

Union IT and telecom minister Prasad, who is also BJP’s face on television channels, is known for his communication skills and legal expertise. He belongs to the upper caste Kayasth community.

There is a saying in the local Hindi dialect that if BJP is sure of any one support, apart from traders, it is the Kayasths. Prasad is said to be in the good books of Modi and the Rashtriya Swayamsevak Sangh (RSS), the latter for his family background as his father was one of the founders of Jan Sangh in Bihar.

Though Prasad said that he was not in the race for the chief ministerial post, unlike Bollywood-actor-turned politician and BJP MP from Patna Shatrughan Sinha, another Kayasth face, leaders in the party say, that Sinha was unhappy for not being taken in as part of Modi’s cabinet and is keen to be the chief minister. They say his denial is not credible.

Rudy and Singh are ‘Babu sahebs’ as their powerful Rajput caste is known in Patna. Both are close to Union home minister Rajnath Singh and the RSS. Even the name of another vocal Hinduvta champion known for making controversial statements – Giriraj Singh, Union minister of state for micro, small and and medium enterprise, is also doing the rounds. Singh is a Bhumihar.

Since last year, a powerful group of upper caste leaders in BJP have been opposing projection of former deputy chief minister Sushal Kumar Modi as the chief ministerial candidate.

Modi, who is from a backward caste and the most influential face, commands respect even among upper castes, say some leaders. But Modi’s disadvantage lies in the fact that two BJP leaders from backward caste are also dead set against him.

Former minister and senior BJP leader, Prem Kumar, has also staked his claim to the chief ministership. He belongs to an extreme backward caste. “BJP should project a leader from an extremely backward castes like him to take on the new combination of the JD-U, RJD, Congress and NCP, which were together eyeing support of the weaker sections and the OBCs,” he said.

Another backward caste leader in the fray is leader of Opposition Nand Kishore Yadav. ”His UPS is that he belongs to the caste of RJD chief Lalu Prasad and BJP has to project a leader to eat into the traditional support base of Lalu,” BJP insiders say.

Yadav opposes Sushil Modi’s projection as chief ministerial candidate but his stature vis-a-vis Lalu would have to stand scrutiny.

In Bihar, all election arithmatic relies on caste. Most parties also lean on backward castes, Dalits and Muslims. Even the Congress, till its influence began to wane from 1989, aimed to secure support of such a combination.

“In the 2014 Lok Sabha polls, BJP applied the trick of wooing backwards though it got 78% of upper caste votes. That was much higher than the OBC votes,” say observers.

The BJP has been relying heavily on the upper castes and had emerged as the only major party in Bihar that claims to safeguard their interests.

With RJD chief Lalu Prasad and Nitish Kumar, both from powerful agrarian backward castes – Yadav and Kurmi- the stage is set for a major caste battle in the state, though through the ballot box.