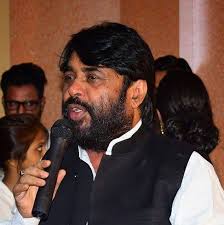 Patna: A senior Bhartiya Janata Party (BJP) lawmaker has come under fire for issuing open threats to Bihar Governor Satya Pal Malik who has launched a crackdown on the education mafia and is trying hard to bring the system of higher education back on track. The Governor of the state by virtue of his office is also the Chancellor of state’s universities.

In an undated video shared by Leader of Opposition in the Bihar assembly Tejashwi Yadav on Monday, lawmaker Nawal Kishore Yadav is heard issuing open threats to kick and punch the Governor. What is further embarrassing, he issues such threats right in the portico of the Bihar state assembly.

“Is the Governor related to my grandfather that we will do whatever he says? Will punch him,” Yadav is heard saying in the video. Yadav is currently a Member of the Upper House of the Bihar State Legislature.

The main opposition, the Rashtriya Janata Dal (RJD) slammed the lawmaker for threatening to beat up the Governor. “BJP MLC (lawmaker) openly threatening honourable governor because he is acting against education mafia and questioning state government on deteriorating law and order situation. Is not BJP a party of goons who even don’t hesitate to threat and beat governor? Such a shame,” asked Tejashwi.

Isn’t BJP is a party of goons who even don’t hesitate to threat and beat governor. Such a Shame! pic.twitter.com/kKoJwZuRFP

Although it’s not known about the origin of Yadav’s anger towards the Governor, it is said the latter earned the ire of the lawmaker for his recent crackdown on the education mafias. Addressing a function in May this year, Governor Malik had issued a stern warning to the education mafias allegedly involved in money minting business and declared to demolish their networks come what may.

“The B Ed (Bachelor of Education) education in the state has become a business and there would be hardly any politician left out who does not own such a college,” the Governor had told a function in Patna this May. He added that such colleges were not only taking admissions illegally and charging exorbitant fees for this but also roped in faculty from neighbouring colleges to satisfy the inspection team which comes to check the facilities at the college from time to time.

He went on to state that such mafia were ganging against him but he was not afraid of them. “Education mafia involved in this business has vested interests and they are a powerful lobby. They are ganging up against me but I am not afraid as I have the mandate of President and PM to work honestly. I will work in accordance to the law,” was how he had declared.

This is the second time in succession that the head of the state has been threatened by lawmakers. Earlier lawmaker Anand Singh who was previously associated with the Janata Dal United had threatened former chief minister Jitan Ram Manjhi when he refused to step down. Subsequently, a complaint was registered with the local police by Manjhi’s nephew Upendra Manjhi.

In his petition, the complainant alleged Singh not only held out open threats to his uncle Jitan Ram Mnajhi, then Bihar CM, but also used derogatory and casteist remarks against him. The threats were issued while Manjhi was still serving as the chief minister. Singh was later granted bail by the court.