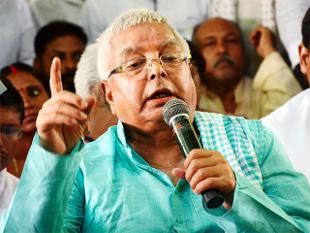 “She is a woman. Parties should not pester her anymore on the issue,” said Mr. Prasad, when asked whether he would demand the resignation of the External Affairs Minister over the Lalit Modi row.

Mr. Prasad asked party workers to gear up for the Assembly elections in Bihar as “it would not just be a State election but one that will decide the fate of the nation.”

“Go and tell the people how the Narendra Modi government has duped them by making false promises of depositing Rs. 15.5 lakh in bank accounts of each Indian after bringing back the black money stashed away in foreign countries and providing employment to millions of youth of the country,” the RJD chief said.

“The whole nation is watching us to see us deliver a crushing defeat to the BJP and PM Narendra Modi in the coming poll,” he said.

Mr. Prasad said his party had entered into alliance with the JD(U) and other parties as it had a “historical responsibility to defeat the BJP in the Bihar elections.”