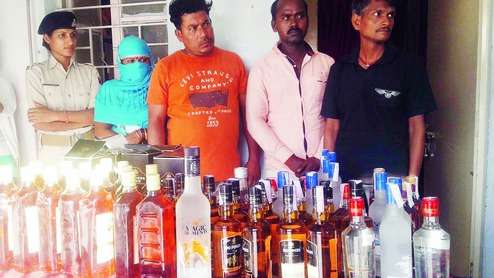 Patna: The Patna police on Thursday busted a gang involved in liquor trade at the upscale Patliputra Colony.

The gang members used to supply liquor in a Skoda, which would anywhere cost around Rs 10 lakh. A woman used to travel with the gang to trick the police during delivery of liquor to customers.

Apart from helping the gang in delivery in Patna, the woman even used to accompany its members in transporting liquor from the Jharkhand border.

Station house officer of Patliputra police station T.N. Tiwari said: “The gang used to keep a woman with them during the deliveries to misguide us. They posed as family. The gang used to operate from a flat at Wazir Apartment in Patliputra Colony.”

The police will also initiate the process to seal the flat (number 204) at the Wazir Apartment. The owner of flat, Pintu Singh, is absconding. The Patliputra police have arrested four people, including the woman.

The kingpin of the gang is Balram Kumar, a resident of Jamshedpur in Jharkhand.