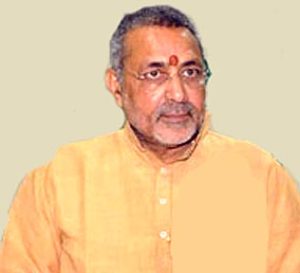 Controversial BJP MP Giriraj Singh, who has been caught in a cash muddle, runs the risk of losing his Lok Sabha membership as he is now charged with filing a false affidavit.

The BJP leader, who contested and won from Bihar’s Nawada constituency, had stated in his affidavit filed before the returning officer that he had Rs 1.4 lakh cash in hand.

But the huge pile of cash stolen from his house and subsequently recovered by the Patna police seems to provide a clear evidence that he had given incorrect information to the Election Commission.

Senior SP (SSP) of Patna, Manu Maharaj, has written to the Income Tax (I-T) department and the Enforcement Directorate (ED) intimating the investigating sleuths about the recovery of Rs 1.14 crore and $600 cash and jewelleries worth lakhs of rupees, which were looted from Giriraj’s house.

Ever since the recovery, the BJP MP has been evading the media and police so that he is not quizzed about how and why he had kept crores of rupees in his cupboard.

Officially, the MP has now made a statement that the money actually belonged to his cousin, but the elusive leader has not named that cousin yet.

The ruling Janata Dal (United) has now sought Giriraj’s arrest. “The law says that you can lose your membership if you file a wrong affidavit. Giriraj, while filing his nomination papers, had mentioned that he had Rs 1.4 lakh in cash. He will now have to explain it to the I-T Dept, ED and the Election Commission how and from where he amassed Rs 1.14 crore in cash,” said JD(U) spokesperson Neeraj Kumar, adding that the probe agency should also investigate his role as Animal Husbandry minister in Nitish Cabinet when BJP was a ruling ally.

To buttress his point, the JD(U) leader cited the case of Lalu Prasad who had to go to jail twice for Rs 48 lakh-DA (disproportionate assets) case in the fodder scam.  “You cannot have different yardsticks for different persons,” said Neeraj, accusing the BJP of double-speak. “Not a single BJP leader has spoken about recovery of money,” he added.