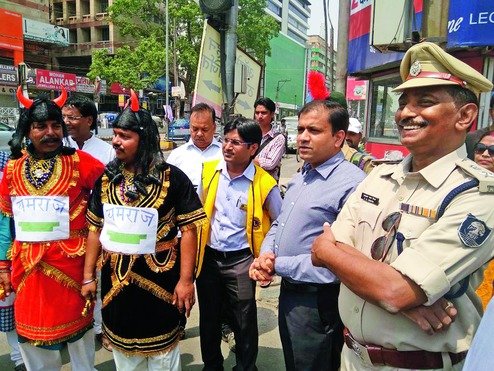 Patna: The transport department thinks it needs a God to streamline traffic and penalise violators in the city.

On Sunday, the department deployed two people dressed up as Yamraj to send the message among the people that those who do not follow the traffic rules will end up meeting the God of death.

The duo, dressed up in mythical Hindu attire, were found warning riders and drivers who were not wearing helmets or seatbelts. Transport department secretary Sanjay Kumar Agarwal and Patna traffic superintendent of police P.N. Mishra were present at Dakbungalow where this new initiative was launched.

Stopping a person who was not wearing a helmet, Yamraj said: “It seems you are in a hurry and want to go to Yamraj. I have come to take you.”

The bike rider laughed out initially but seeing the cops he pledged to ride the bike only after wearing a helmet. One by one, the Yamraj duo kept stopping violators.

On the reason for starting such an initiative, Agarwal said: “They will not only warn but also fine the violators and officials of the transport and traffic departments will accompany them. Our motive is to make people aware about road safety. Through Yamraj, we want to send the message that without safety measures, it is dangerous to drive and people can lose their lives.”

The awareness about the road safety was also being made by schoolchildren and members of the National Cadet Corps. Agarwal on Sunday inspected the road safety drive and asked the officer concerned to take action against the violators. He also said that the percentage of people not wearing seatbelts has gone down in the past few days.

So far 12,000 people have been fined across state for violating the traffic rules.

The transport department on Sunday also took a decision to roll out the drive to issue e-challan against those who jump signals and the zebra crossing. It would done through Automatic Number Plate Recognition System (ANPRS). “Many times, the traffic police is not present on the spot in and the traffic violators flee from the spot but with the e-challan system, the number plate of the vehicles would be automatically captured through the closed-circuit television cameras and the e-challan along with the photo would be sent to the person on their registered address,” Agarwal told The Telegraph, adding that the drive would be launched in the next three days.

Agarwal said he has already discussed the drive with the traffic SP and visited the traffic control room on Sunday at the Patna police headquarters to inspect how the control room functions.

ANPRS is used for different purposes to streamline the traffic in the city including seatbelt. Now, ANPRS would be used for red light violation detection system (RLVDS).