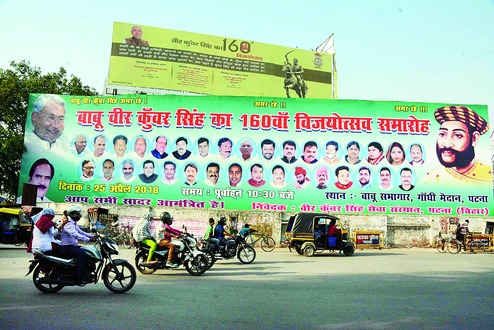 Patna: Chief minister Nitish Kumar’s JDU has put up a huge poster at the Income Tax roundabout here, advertising the 160th anniversary of Veer Kuer Singh’s victory over British forces in 1857. Most of the leaders smiling out of the poster are Rajputs by caste.

Using icons for caste support is not new in Bihar. But what is new is the scale at which anniversaries of icons are being celebrated on caste lines, and the new caste icons.

Nobody is spared; Mahatma Gandhi’s portrait is being used in programmes sponsored by the Vaishya caste, and Sardar Vallabhbhai Patel has become handy for Kurmis.

“Sahajanand Saraswati was one of the greatest farmer leaders of the 20th century and yet today his anniversary is being celebrated only by organisations led by Bhumihar political leaders. Same goes for national poet Ramdhari Singh Dinkar and Bihar’s first CM Sri Krishna Sinha,” remarked senior RJD leader Shivanand Tiwari. “This trend has increased after 2014.”

The “newest” caste icon to have emerged in recent years is emperor Asoka, who was declared a Kushwaha by no less a person than Union minister Ravi Shankar Prasad.

More recently, Lord Parshuram’s birthday was observed with fanfare by Brahmin groups. A senior Congress leader even rebuked the Nitish government for “forgetting” the anniversary and declared that the government did not care for Brahmins.

The freedom fighter Jubba Sahni is also a new icon to woo the Mallahs.

Asked why there is a renewed rush among politicians and political groups to celebrate caste icons, a veteran leader said: “Perhaps they have nothing positive to give to the caste and are therefore falling back on eulogising their icons.”

The tentacles of caste reach deep in Bihar. When the Opposition demanded sacking of chief secretary Anjani Kumar Singh, two ruling party leaders from Singh’s caste came out in his defence. In the name of caste, a procession was taken out in Muzaffarpur in support of suspended SSP Vivek Kumar.