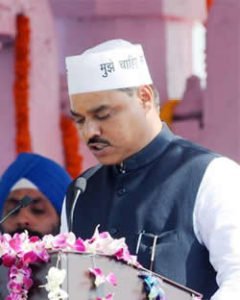 Munger/Bhagalpur: AAP leader Jitender Singh Tomar, who quit as Delhi Law Minister after being arrested on charges of furnishing false degrees, was on Friday confirmed to have passed law examination in 1998-99 from a Bihar college.

Officials present during the questioning of Tomar, who was brought from Delhi by police at Biswanath Law College in Munger, said on condition of anonymity that college registers revealed that the former minister had enrolled in it under roll number 10136 in 1994-95 session.

Tomar was questioned for over three hours in Principal R K Mishra’s room in his presence, the officials said.

Some AAP workers assembled at the college gate and raised slogans against BJP for ‘targeting’ their party.

However, the local address given by Tomar during registration in the college was found to be ‘not correct’, the officials said.

Tomar had given his local address as Agrahan village but the villagers did not confirm that he stayed there during the period.

A Delhi Police team, led by Assistant Commissioner of Police S P Tyagi, then took him to Tilka Manjhi Bhagalpur University under which the college is affiliated.

Meanwhile, the former Delhi law minister faced the ire of student activists of AISA, Rashtriya Lok Samata Party and LJP who threw tomatoes and eggs at him.

Tomar was arrested on June 9 on charges of cheating and fraud in obtaining his law degree.

49-year-old Tomar, MLA from Delhi’s Trinagar constituency and a first-time minister, had failed the test yesterday when he was taken to K S Saket PG College and RML Avadh University in Faizabad, from where he claimed to have earned his BSc degree.

Police said he failed to locate his classroom, physics laboratory and the washroom and that investigation at Faizabad “more or less” corroborated the earlier police findings that his degrees were fabricated.