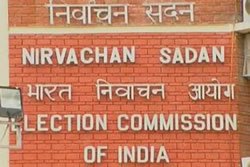 NEW DELHI: It is a truth universally acknowledged that election promises are made to be broken. While addressing a gathering on the eve of ‘Civil Services Day’ recently, Delhi Chief Minister Arvind Kejriwal said, “…I have confidence that within the next five years, even if we are not able to deliver 100 per cent on our promises, we will at least achieve 40 to 50 per cent, which would not be bad.”

The Aam Aadmi Party is not alone. All political parties, regional or national, release manifestos full of promises to be completed if they come to power. And like the Kejriwal government, many state governments are now finding it difficult to fulfil their poll pledges. After the division of united Andhra Pradesh into two states, ‘Bangaru Telangana’ (Golden Telangana) and ‘Swarnaandhrapradesh’ (Golden Andhra Pradesh) were promised to the people. But such dreams are a far cry from the situation on the ground.

But this pattern is headed for a change as the Election Commission (EC) seems determined that its recent guidelines on manifestos are adhered to by all political parties.

Now as election clouds are fast approaching Bihar, the EC has reminded political parties to follow the new guidelines. In a letter to political parties, in the last week of May, it asked them to adhere to the guidelines.  “The fountainhead of the powers under which the commission issues these orders is Article 324 of the Constitution which mandates the commission to hold free and fair elections,” the poll body made it clear.

The fresh EC reminder has many political parties worried. As per EC guidelines, political parties are bound to reflect the rationale, ways and means to meet financial requirements for poll promises made in the manifestos.

The law is clear that the promises made in the manifesto cannot be construed as corrupt practice under Section 123 of the Representation of the People Act. However, the EC pointed out that reality cannot be ruled out.  Distribution of freebies of any kind, undoubtedly, influences all people and it shakes the root of free and fair elections to a large degree.

Secondly, political parties generally release their election manifesto before the announcement of the election date. In that scenario, strictly speaking, the EC will not have the authority to regulate any Act which is done before the announcement of election date. However, the EC now says that an exception can be made as the purpose of election manifesto is directly associated with the election process.

■ The election manifesto shall not contain anything repugnant to the ideals and principles enshrined in the Constitution and further that it shall be consistent with the letter and spirit of other provisions of Model Code of Conduct.

■ The directive principles of state policy enshrined in the Constitution enjoin upon the state to frame various welfare measures for the citizens and therefore there can be no objection to the promise of such welfare measures in election manifesto. However, political parties should avoid making those promises which are likely to vitiate the purity of the election process or exert influence on the voters in exercising their franchise.

■ In the interest of transparency, level playing field and credibility of promises, it is expected that manifestos also reflect the rationale for the promises and broadly indicate the ways and means to meet the financial requirements for it. Trust of voters should be sought only on those promises which are possible to be fulfilled.