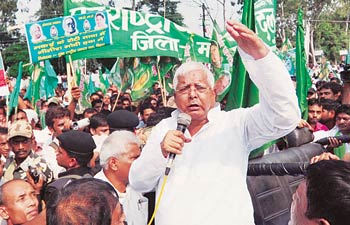 Patna:  RJD leader Lalu Prasad today ridiculed the BJP saying that it was a matter of shame that the party did not have a person to project as its Chief Ministerial face for the Assembly polls, despite claiming to be the world’s largest political party.

“Its a matter of shame that the party (BJP) which claims to be the world’s largest political party does not have a face whom it can project as its Chief Ministerial face for the polls,” he quipped in a tweet.

Ananth Kumar had yesterday said the saffron party will go to hustings under Prime Minister Narendra Modi’s leadership by showcasing his agendas of development and good governance.

Sushil Kumar Modi, who was the Deputy Chief Minister for eight years under the incumbent Chief Minister Nitish Kumar, said the party’s central leadership will take a call at an appropriate time on whether to project a Chief Ministerial face or go with collective leadership in the Assembly polls.

Mr Prasad, who had declared last week that senior JD(U) leader Nitish Kumar will be the secular alliance’s Chief Ministerial candidate for the upcoming Assembly polls, has been riling the BJP to name its face for the crucial polls.

The JD(U) has also mounted a frontal attack on the BJP on the Chief Ministerial issue with its state unit chief Bashistha Narayan Singh wondering as to how a political party which cannot even decide on naming its Chief Ministerial face can go to the electorate with confidence to seek a mandate.