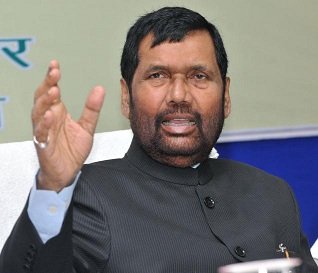 New Delhi: Lok Janshakti Party (LJP), which is a key ally of NDA, today got into a controversy with party president Ram Vilas Paswan’s younger brother Ramchandra Paswan suggesting that the Union Minister should be projected as Chief Ministerial candidate of Bihar.

As his remarks went viral on some television channels, the party quickly distanced itself from his remarks saying this may be his ‘personal’ opinion and LJP will go with the choice of the BJP on this matter.

Ram Chandra Paswan is learnt to have said that LJP wants to field candidates on 65 seats and that NDA can form a government in Bihar as well if it goes to the polls with Ram Vilas Paswan as its election face. He had also recalled that former Prime Minister Atal Bihari Vajpayee also wanted to make Paswan the Chief Minister of Bihar.

LJP secretary general Abdul Khaliq, however, distanced the party from Ramchandra Paswan’s remarks. “Our official stand is that, LJP will accept whichever person is chosen by the BJP as its leader or CM candidate for the Bihar Assembly polls. We will go by the decision taken by the BJP in this regard. What Ramchandra said may be his personal opinion. Similarly there has been no discussion so far on the number seats, which we want to contest,” Khaliq stated in an apparent damage control exercise.