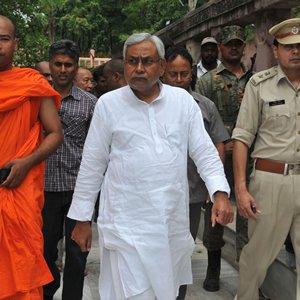 Saharsa / Patna: Chief minister Nitish Kumar on Thursday said for a strong and real political alternative in the country, first move has been made for a federal front. This development, he said, has made NDA and UPA squirm.

Addressing JD(U)’s 10th Sankalp rally at Patel Maidan, Saharsa, Nitish said NDA and UPA will collapse like pack of cards. “Poor people do not speak much, they speak through their votes. It will be suicidal to ignore their power,” the CM added.

Hitting out at the statement of a Gujarat minister blaming Biharis and UP migrants for the poverty in Gujarat, the CM said it was an insult to Bihar. He said, “If the migrant workers from Bihar do not go to Gujarat, who will construct tall buildings there and who will weave clothes? Wherever Biharis go, they work and labour hard and are not a burden on anybody. We have to take a pledge to build a Bihar where nobody would need to go out to eke out a livelihood. We can develop it by getting special category status.”

Appealing the people to maintain peace and communal harmony, the CM said development could not be possible if there is no peace and harmony. He warned that some elements are hell bent on disturbing social peace. Though he did not identify such elements, the CM accused the BJP of breaking the agreement not to raise the controversial issues. “They brought up a controversial face despite our opposition. The people have to remain alert with the people who do not like peace and tranquility in the society,” he said while indirectly referring to BJP’s PM candidate Narendra Modi. He said through so-called surveys and advertisement they are trying to misguide the people but they will not succeed.

The chief minister held the Centre responsible for backwardness in the state. He, however, said his government works for inclusive growth with justice and people from all walks of life enjoy equal opportunity for development. Nitish accused the BJP of doing politics of rumour mongering .He said the Sankalp rally is aimed to keep disturbing element at bay.

Nitish said, “We have fought for special status right from Patna to Delhi, now there is need to raise our voice in Parliament and urged the people to vote for the party to enable it win all the 40 LS seats in the state.”

Efforts are on to form a third alternative in the country. Eleven political parties have already extended their consent for the Third Front, he said.

Nitish said the state achieved growth in the agricultural field and stood first in paddy production and won an award from the President. Now it is the turn to bag similar prize for wheat production, he said. He also reiterated his commitment to rebuild the better Kosi.