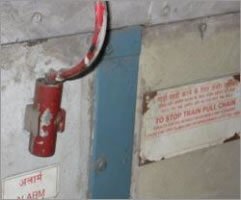 NEW DELHI:  The railways on Tuesday dismissed any proposal to do away with chain pulling system in train coaches, but said that adequate awareness will be created among passengers to stop its misuse.

Earlier, a few officials had claimed that the railways had planned to do away with the facility as it was prone to regular misuse and led to loss of revenues to the public transporter.

Railway spokesperson said on Tuesday night that while there are growing instances of the misuse of the system it would not replace it from the coaches.

Chain pulling has been a big menace across the railway network, especially in states such as Uttar Pradesh and Bihar, leading to delays and a drain on the railway exchequer. Of particular concern was its misuse for nefarious activities.

Given its misuse, the railways had been toying with the idea of putting in place a mechanism including strict checks to ensure that this facility is not misused.