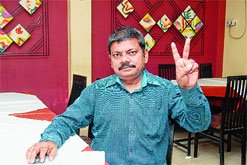 Patna: The Cricket Association of Bihar secretary, Aditya Verma, on Tuesday, said he welcomed the Supreme Court’s observation that Narayanswamy Srinivasan should step down as the Board of Control for Cricket in India (BCCI) president, to ensure a fair probe of the IPL fixing and betting scandal.

A former under-22 cricketer from Bihar, had waged a legal battle against the BCCI president first in the Bombay High Court and then in the Supreme Court.

“It’s a huge step towards cleaning up the cricket administration,” Verma told The Telegraph. “When I entered the court room this morning, I knew truth would prevail.

“I was not alone… thousands of budding cricketers from Bihar were praying for Srinivasan’s downfall. Apart from ruining Indian cricket, the man has also done a great damage to Bihar cricket by preventing the state from playing in official tournaments,” Verma added.

The Bihar cricket official, who has been fighting court battles against the BCCI for several months, said he would keep a close track on the developments in the next couple of days before the case comes up in the Supreme Court again on Thursday.

“I am hopeful that good sense would finally prevail and Srinivasan would step down. We all heard the kind of strong words the court used while asking Srinivasan to resign.

The conflict of interest in BCCI is too much… he has no option but to vacate his chair,” he said.

“The kind of game the BCCI played to sweep the IPL corruption issue under the carpet is unthinkable,” Verma said. “Ankeet Chauhan and Sreesanth were found guilty and were thrown to the dustbin within no time.

For almost similar offences, Srinivasan’s son-in-law, (Gurunath) Meiyappan was given a clean chit. Even the Chennai Super Kings, the team owned by Srinivasan’s company and who are in the eye of the storm, have not been hauled up.

“It was done despite the fact that police investigations were going on. Never before in the long history of the BCCI has one seen such blatant nepotism,” he added.

Asked about his role, Verma said: “I am an insignificant character in this whole drama. I am no social worker… I am not trying to become Arvind Kejriwal.

“Whatever happens in the end, the message is very clear. No one trying to tarnish the image of the great game would be spared. The corrupt people would have to pay for their sins one day.”

Verma’s angst against Srinivasan goes back to 2007, when he floated the Cricket Association of Bihar (CAB) in order to provide a platform for budding cricketers of Bihar. Srinivasan had allegedly created problems then.

The then Bihar Cricket Association (BCA) had failed to get BCCI recognition at that time. Later the BCA was given associate membership status. Srinivasan was then the BCCI treasurer.

“When I tried to do something positive by floating CAB, Srinivasan ensured that the BCA, which was doing nothing for promoting the game in the state, was given associate membership,” Verma added.

Verma maintain that it was Srinivasan who scuttled his efforts to provide a proper platform for budding cricketers of Bihar.

The plight of cricketers in Bihar started after BCCI recognised the Jharkhand State Cricket Association as the official body, though the BCA was the original association with recognition since 1935.

It was only after the state of Bihar was divided into Bihar and Jharkhand that the problem started.

Verma worked as a sports assistant with Tata Steel in 1982 and took voluntary retirement in 1992. Since then, he has been running a restaurant and a transport business in Patna.

But he never gave up on his fight for cricket.

“I felt bad when I had to send my son to Bengal for playing cricket as no association in Bihar has proper BCCI recognition,” he said.