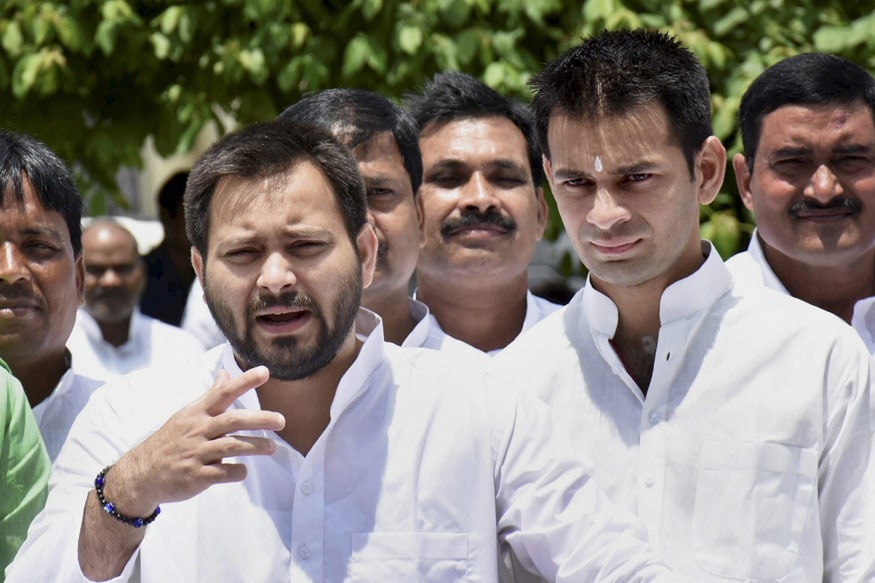 New Delhi: The Congress should let other parties be in the “driving seat” in states such as Uttar Pradesh and Bihar where it is not the largest opposition party, says RJD leader Tejashwi Yadav, asserting that “egos” need to be set aside to jointly take on the BJP in 2019.

The issue of a prime ministerial candidate is secondary and it is more important for opposition parties to come together to “save the Constitution”, said the leader of opposition in the Bihar Assembly and the younger son of Rashtriya Janata Dal chief Lalu Prasad.

“In my view, the talk about a prime ministerial candidate should be secondary because there is danger facing the country. The Constitution, democracy and reservation are in danger,” the former Bihar deputy chief minister told PTI in an interview.

He cited the example of UPA-I, when the decision to appoint Manmohan Singh as prime minister was taken after the elections, to buttress his point.

Yadav, who declared that the opposition can win by coming together, said the 2019 elections will be a contest between Gandhi-Ambedkar-Mandal versus Golwalkar-Godse.

“So all political parties in the opposition that believe in social justice and secularism should set aside their egos and differences and come together to save the Constitution,” the 28-year-old leader said, referring to the ideas of Mahatma Gandhi, B R Ambedkar and the Mandal commission on reservation versus RSS ideologue M S Golwalkar and Nathuram Godse.

The BJP wants to enforce “RSS law” in the country, Yadav alleged, recalling Union Minister Anant Kumar Hegde’s remarks that the party had come to power to change the Constitution.

Stressing on the need for an opposition alliance, he said the Congress, being the larger party, has a larger responsibility in taking others along.

“But the Congress has to see how it will manage alliance partners. In Bihar, we (RJD) are the largest party, so it has to make a strategy accordingly. Take UP, for instance, when Mayawati ji and Akhilesh ji are united it should make the strategy according to that, Yadav said.

According to him, the Congress’ strategy should keep in mind not just its own interests but also that of its allies and make sure that they are shown respect.

Noting that the BJP and the Congress have a direct fight in almost 18 states, Yadav said in states such as Uttar Pradesh and Bihar, the Rahul Gandhi-led party should let the largest opposition party sit in the “driving seat”.

Dispelling rumours about cracks in opposition unity with many top opposition leaders absent from Gandhi’s iftar earlier this month, Yadav said it was not an issue. He was not there but RJD MP Manoj Jha represented the party
“On the same day, we had also organised an iftar (in Bihar). A lot of political leaders had sent their representatives (to Gandhi’s iftar), he said, asserting that opposition unity was increasing.

“On the stage in Karnataka, Chandrababu Naidu ji was also there. He was part of the NDA earlier, now he was seen at the stage of opposition parties. It will take time for parties to come together, it cannot happen overnight, the RJD leader said.

Asked if the BJP has an advantage having a PM face in Narendra Modi, Yadav claimed that there is a rift among NDA members and there is no surety about whether the alliance will stay or break up.

“People have seen Modi ji for four years, he did not do anything. People should ask what he is doing for the country. The one who has not worked, how can he be the PM face. BJP does not answer this question and diverts issues,” he said.

India needs a prime minister who does not lie, who does not do “jumlebaazi” and who does what he says, Yadav said, alleging that Modi goes from making one promise to another without fulfilling them.

The issue of seat sharing was an internal issue and would be taken care of, Yadav said, adding that it would not be a roadblock in opposition parties coming together for the 2019 general elections.

“Why don’t we look at the NDA. Let’s take the example of Bihar, how they are going to accommodate Nitish Kumar ji…How are they going to share seats with the Shiv Sena, will the alliance survive?” Yadav asked.

Bihar Chief Minister Nitish Kumar of the JD(U) had dumped the RJD and the Congress last year to join hands with the BJP to form a new coalition government in Bihar.
“The BJP is not alone. Why do we always forget and we always concentrate on Modiji’s face. He has 40 alliance partners. He is not alone, why should we be alone,” Yadav said.

“We have given an example in Bihar to form a Mahagathbandhan. Lalu ji has already set the formula for opposition unity.

The problem is in their camp, not ours, a confident Yadav said.