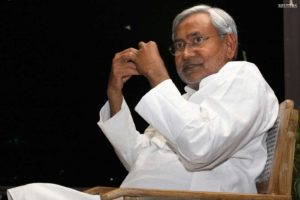 Karamauni, Gaya: Cautioning the voters against the return of ‘jungle raj’ and the communal brand of politics, chief minister Nitish Kumar on Tuesday said the Lok Sabha elections mean much for the state as the outcome would determine the future of Bihar.

Addressing an election meeting in Karamauni village of the district off NH-83, the CM said this parliamentary election is unique in the sense that no other election had ever meant so much for any state as this one is for Bihar. Referring to the BJP and the RJD, Nitish said the victory of communal/criminal forces would defeat the development politics in the state. If these forces win, the state government would soon be destabilized, thereby derailing the entire growth process.

Claiming to be a firm believer in the politics of principles, the Bihar CM said he severed ties with BJP for that and put his political future at risk. To that, Nitish supporters greeted him with ‘future PM’ slogans.

Campaigning for JD(U) candidate Jeetan Ram Manjhi, he said the Bihar model of development held humanity at centre stage as it believed in inclusive growth, but the Gujarat model was extremely selective and inherently anti-poor.

Reminding the people of the bad old days, the CM said Bihar might not have become totally crime-free but criminals in his regime were brought to book and not accorded state patronage like earlier. Literally singing his old theme song, Nitish said earlier Bihar made news for massacres and kidnappings for ransom. Now, it made news for its successful growth story. Despite the strides made in the last few years, Bihar continued to lag behind the national parameters and as such, special state category status was needed to make the state move forward at an accelerated pace.

Referring to the works done by his government to empower women through 50% reservation in panchayati raj institutions, he said the cycle scheme for school-going girls was a novel idea. Enrolment of girls schools went up by nearly four times during the last seven years. The percentage of dropout schoolchildren had come down from 12% during the previous regime to about 1%.

Without naming Narendra Modi and Lalu, Nitish said whereas one was daydreaming and presenting false statistics, the other was trying to rekindle the dead lantern.