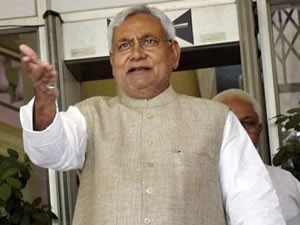 For the first time since he joined hands with the Bharatiya Janata Party (BJP) in July 2017, Bihar Chief Minister Nitish Kumar has said that his government will not compromise on “communalism and corruption”. It is pertinent to ask why he found it necessary to make this assertion now, especially as these have anyway been his government’s top priorities. Has Mr. Kumar started feeling the heat of his government’s alliance with the BJP? Or has he sensed the groundswell after this month’s by-elections, where two out of three seats, one Lok Sabha and one Assembly, were won by the Rashtriya Janata Dal (RJD)?

In June 2013, when Mr. Kumar parted ways with the BJP after an eight-year alliance, he said that it was getting difficult for him to continue in the new era of the BJP. After his humiliating defeat in the 2014 general election, in which his party got just two seats, Mr. Kumar shook hands with RJD supremo and old-friend-turned-bitter-foe Lalu Prasad. Earlier, Mr. Kumar had fought Mr. Prasad on the issue of “corruption and crime”, and swept to power in 2015. Later, he had said that he would not ally with the BJP and with “divisive politics”. Forging a “secular alliance” with the RJD and the Congress, Mr. Kumar ran the government for nearly 20 months before he suddenly awoke to the issue of corruption. He dumped the RJD in July 2017 to join hands overnight with the BJP. Now the wheel of Mr. Kumar’s political ambition appears to have turned yet again, after just seven months of partnership with the BJP.

Between these political flip-flops, Mr. Kumar is likely to have lost his well-crafted political persona and credibility. The people of Bihar now appear to have realised that his modus operandi is to remain in power while raising issues of corruption and communalism as required by electoral imperatives. This was evident during the Lok Sabha by-elections in Araria and Jehanabad where, rather than believe Mr. Kumar’s rhetoric, voters looked away, angered by his “betrayal” of the mandate they gave him, the RJD and the Congress in the 2015 Assembly election. Both Araria and Jehanabad are not traditional seats for the RJD but the party won them. Facing defeat in Jehanabad, Mr. Kumar said that he had fought the poll under immense “pressure” from the BJP.

Meanwhile, the BJP has perhaps concluded that Mr. Kumar may be political excess baggage in the upcoming general election. Thus, it has started pushing its own brand of political messaging, as seen in the recent comments by top BJP leaders in the communally sensitive areas of Araria, Bhagalpur and Darbhanga.

What Bihar’s voters will be asking themselves is this: Is Mr. Kumar fishing in uncertain political waters based on some obscure caste calculations, or are his latest remarks merely a prelude to his falling into the lap of Mr. Prasad once again?