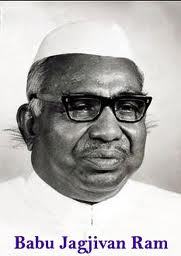 Jagjivan Ram was a Union minister and a prominent Dalit leader who had worked tirelessly throughout his life to promote equality in the society. Fondly called ‘Babuji’, he was among the founding members of the All India Depressed Classes League which worked for attaining equality for untouchables.

In 1946, Jagjivan Ram became the youngest minister in the interim government headed by Jawaharlal Nehru. He served as the first Labour Minister of the country.

Born on April 5, 1908 in Chandwa village of Bhojpur district of Bihar, he holds a world record of being a parliamentarian uninterrupted for a record 50 years between 1936 and 1986.

A freedom fighter and a social crusader, Jagjivan Ram had held several Central portfolios. He was also the Deputy Prime Minister between 1977 and 1979 in the Morarji Desai government.

Banaras Hindu University (BHU) Madan Mohan Malviya was so impressed by Jagjivam Ram’s proficiency in Sanskrit that he invited him to join the university. But at the BHU, Jagjivan Ram was faced with the caste discrimination, forcing him to quit. He later joined the Calcutta University where his leadership quality was flowered.

There is a famous story about Jagjivan Ram’s visit to Puri-based Jagannath Temple. Since he was a prominent face, he was allowed to offer prayers at the temple, but his wife and others were not allowed to enter the temple because of their caste. Jagjivan Ram had at that time also decided not to visit the temple. His wife Indrani had in her diary written that she wished to offer prayers at Lord Jagannath temple but it dried in her heart.

His daughter Meira Kumar, who had served as the Lok Sabha Speaker between 2009 and 2014, had once narrated a story related to her father’s childhood. She said that when his father stood first in Class 10, he had no money to pursue education further. At that time, few nuns had offered his mother to send his son to a school in Lucknow and later to America But his mother turned down the offer saying you will educate my son and but change his religion.

In another incident reported from a remote village in Uttar Pradesh, now in Uttarakhand, a newly married constable with his bride wanted to offer prayers at a temple. When they visited the temple, the priest had locked the door because they were from the backward community. When Jagjivan Ram approached the priest, the upper caste people wanted to stone them to death.

It was during his tenure as the Defence Minister, India won the Bangladesh war and it was recognised as a new nation. He was the Defence Minister between June 1970 and October 1974. Until Indira Gandhi declared an emergency, he remained in the Congress. After this, he joined the Janata Party and served as the 4th Deputy PM of India.

His immense contribution to the Green Revolution and modernising agriculture is still remembered. He was the Agriculture Minister for two tenures.