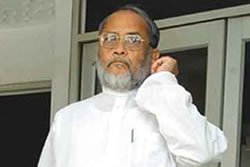 “Nitish is part of political forces that are communal,” said Taslimuddin, who is currently serving his seventh term in Parliament. Describing his party’s coalition with Janata Dal (United) an erroneous move, the veteran leader added, “Alliance with Nitish will hurt anti-BJP forces in the state”.

The statements of the senior RJD leader will definitely hurt the prospects of the grand-alliance led by the combination of Lalu Prasad Yadav and Nitish Kumar. Taslimuddin holds a significant amount of influence among the electorates of the minority community. His negative remarks against the incumbent chief minister is bound to provide fodder to political opponents.

Taslimuddin, has been one of the staunchest critic of Nitish Kumar. JD(U)’s 17 year-old alliance with BJP has raised questions over Nitish’s secular credentials.