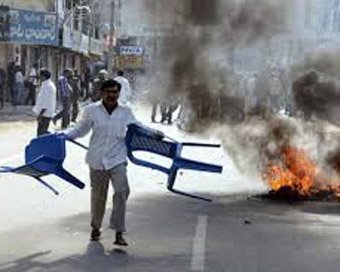 The 9-hour Rohtas district bandh, called by BJP and LJP to protest the police firing at Akbarpur in which two persons were killed on Tuesday, hit the normal life today.

Shops were closed and vehicles did not ply. The protesters blocked traffic in various places in Sasaram town and adjoining areas, police said.
Scores of BJP and LJP workers and their supporters moved in various places in the district enforcing the bandh and demanded Rs 10 lakh compensation for the families of the victims by the administration.
Akbarpur, where the incident had occurred, observed a total bandh with the market area completely closed and residents remaining indoors.
The Bandh call is from 6 AM to 3 PM to ensure Muslims do not face any problem in ending their Ramzan fast in the evening, bandh organisers said.
Police personnel backed by two companies of Rapid Action Force (RAF) stood guard at various places in the district to check any incident of violence by protesters.
Patna Divisional Commissioner N Vijaylakshmi and Zonal Inspector General (IG) Kundan Krishnan camped in the district to monitor the situation.

“The bandh has been peaceful. There has been no violence or arrest. Roads have been blocked at three places – near the post office in Sasaram, Shivsagar area and Tilauthi. We expect all the routes will be cleared once the bandh is over,”  the IG said.