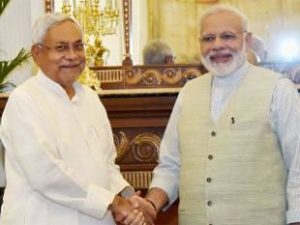 Going into the 2019 general polls, JD(U)’s continuous slide in vote share will be a cause of concern for the BJP

In the din of the by-election defeats of BJP in Gorakhpur and Phulpur parliamentary seat by-elections in UP, the far-reaching implications of the BJP-JD(U) alliance’s defeat in the Araria Lok Sabha constituency and Jehanabad Assembly constituency in Bihar went unnoticed.

The defeat in Bihar is more worrisome for the BJP than its UP defeat. Why is it so? In Gorakhpur and Phulpur parliamentary seat by-elections, SP and BSP, aligned and defeated BJP by a relatively lower margin, whereas in Bihar’s Araria and Jehanabad, the second party defeated the alliance of first and third party. It is too simplistic to state that that RJD retained both Araria and Jehanabad and hence the BJP-JD(U)’s defeat will not have any impact in the 2019 general elections.

To understand why this defeat is worrisome for the BJP, it is important to review the growth of the various political parties in Bihar since 2005 and how the alliance with JD(U) may become a burden for the BJP while facing future elections.

Bihar is a politically active State where a number of smaller parties and independents enter the fray in every election. As a result, the vote share of the main political parties normally gets restricted to about 70-80 per cent. Given this and the multi-cornered contests, any party which has a vote base of about 25 per cent or more has a reasonable probability of winning elections, if it could form an alliance with smaller parties to take the vote percentage to 30-35 per cent.

There are three mainstream parties that have been deciding Bihar’s political fate in the last two decades — the RJD, the JD(U) and the BJP. Although the Congress and the LJP are also in the fray either independently or in alliance with one or more of the three main players, their role is not as significant as the three dominant political parties.

The RJD was the number one political force in Bihar till 2005, ruling the State with about 28 per cent vote share. However, it lost power in 2005 and witnessed a decline between 2005 and 2010. The RJD’s vote share declined to 20 per cent in the 2009 general elections and further to 18.84 per cent in the 2010 Assembly elections. In the 2014 general elections, the RJD got 20.10 per cent votes in alliance with the Congress and in the 2015 Assembly elections, it secured 18.4 per cent votes by winning 80 seats out of 101 seats it contested, by being part of the “Mahagatbhandan” consisting of RJD, JD(U) and Congress.

The BJP, which was a distant third party with a vote share of about 11 per cent in February 2005 improved its vote share to 15.65 per cent by October 2005. In 2010, it further consolidated its position by securing 16.46 per cent of the vote share, in alliance with the JD(U). By taking advantage of the Modi wave as well as its organisational strength, the BJP emerged as the number one party in Bihar by 2014 with 29.9 per cent vote share. Even during its defeat in the 2015 Assembly elections, the BJP managed to secure 24.4 per cent votes, the highest among all political parties, once again establishing its numero uno position.

There are at least three clear inferences that can be drawn from the election results since 2005. The first one is that despite of being in power since 2005, Nitish Kumar and JD(U) have been losing popularity continuously. Given that Nitish Kumar has ruled Bihar continuously since 2005, barring Jitan Ram Manjhi’s brief stint, he should have become an unassailable leader of Bihar and the JD(U) should have emerged as the number one party. Instead the party has slipped to the third position in terms of vote share.

Despite this, the JD(U) has been getting more share in seat allocation than its true strength due to political circumstances.

The second inference is that the voting pattern of the past elections show that the strike rate of JD(U) has been poor irrespective of the alliance it belongs to (Congress is another party whose strike has been poor). The third inference is that given the poor organisational machinery and inability of the JD(U) in garnering votes, the BJP will have to give a piggyback to JD(U) in 2019 general elections and there is fair possibility that the sizeable seats allotted to JD(U) may not come to NDA kitty given its poor strike rate, even when being part of the winning alliance.

In this backdrop what are the BJP’s options in Bihar? Given that the BJP alliance without JD(U) won 31 out of the 40 seats from Bihar in the 2014 general elections, and given that in the current circumstances the JD(U) cannot join hands with the RJD, , the BJP should allocate seats to the JD(U) in proportion to its strength in the 2019 general elections. Political alliance is not a charity and parties should get seats in proportion to the value they bring to the alliance and their ability to convert the allotted seats to the winning tally. The dog should wag the tail and not the other way around.