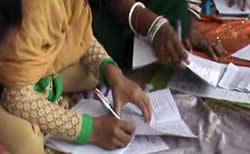 Patna: The focus of attention this year after the Bihar Board exam Class 10 results, declared on June 22, was not talent but ‘physical verification’ of toppers. The recent merit list scandals, involving students who aced state board exams but fudged their age and could not come up with answers to even the most basic questions, forced the Bihar School Examination Board (BSEB) this year to go into overdrive and physically verify each student figuring in the top 10 ranks.

Much to BSEB’s embarrassment, Class 12 arts topper Ruby Rai in 2016 had failed to answer basic questions related to her study programme, adding that students of political science were taught cooking. This year again, Class 12 arts topper Ganesh Kumar mentioned his age as 24 on the application form of the matric examination but turned out to be 42 years old. He took this step because he wanted the exam certificate to mention his age as 24 (for reasons undisclosed). When quizzed by the media, his responses to questions on ‘sur’ and ‘taal’ in music, his subject, were also ‘vague’.

Scrambling to salvage the situation, BSEB introduced a physical verification process from this year for Class 10 toppers, cross-checking their age, interviewing them, and revaluating their answer sheets.

This correspondent has learnt that the panel set up to verify the toppers this year had four ‘experts’ from different who asked them questions in what were described as “oral tests,” besides interviewing them.

How much time did it take?

“The physical verification process took a total of four days and it was completed on Monday, June 19,” BSEB chairman Anand Kishore said.

“The process took time because many students were in Delhi, Kota and other cities for admission in colleges or for engineering coaching. So, they were unable to come to Patna on time. Looking at the seriousness of this process the board office specially called them by flight. Other candidates were called by train and the board paid for the to and fro air fare and railways fare,” Kishore added.

None of the 21 students in the top 10 ranks (many had scored the same marks) in the Bihar Board matriculation examination, the results of which were declared on June 23, were from state capital Patna, where BSEB is based.

Distinguishing fake from genuine – how does the process work?

Distinguishing a ‘fake’ topper from a genuine one is definitely a complicated process, but so far whatever BSEB has done seems to have satisfied board officials.

For the students, however, it was an entirely different ball game.

Topper Prem Kumar “was very nervous before the test. I was wondering what they will ask me and was afraid that I might get very nervous and fail to answer them. I had taken the exam fairly and had worked very hard. Just due to this nervousness I was worried that if I fail the oral test everything will go in vain. However, once I entered the room, I saw four panellists who were experts of different subjects. They asked a few questions from history, maths, political science and Hindi, mainly. Luckily, these were from our syllabus and I answered their questions.”

With this step of physical verification, the toppers did not have to face media interviews as the board had “ensured their genuineness.”