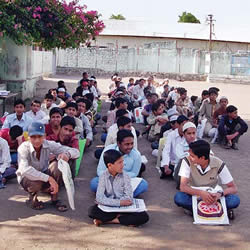 Rahmani30 a Patna-based coaching centre for Muslim IIT aspirants will soon open its maiden branch in Maharashtra in Fort area. The centre would nurture and teach 30 underprivileged Muslim boys from poor socio-economic background.

The centre would be a residential coaching centre just like one in Patna and they would bear all expenses. Top 30 students, who gave their class X exams this year would be selected after an entrance test. This test would be conducted at many centres on April 14 across Maharashtra. The three-hour long exam will test their skills in physics, chemistry and maths.

“The Anjuman-e-Islam trust has decided to collaborate with Rahmani30. The Memon Chamber of Commerce would fund for the education and other expenses that could be over Rs1crore,” said Shakir Shaikh, a teacher from a Malegaon school and a coordinator for the exam.

Five-year-old Rahmani30, had conducted an entrance exam in Maharshtra last year. But the response was poor as many parents were apprehensive to send their kids to Patna for two years.

Also the boys found it difficult to compete with their counterparts from other states. In 2013 and 2012, not a single boy from Maharashtra cleared the exam. In 2010 and 2011, only one student was selected each year. The poor show was attributed to low quality education provided in the Urdu medium schools.

The coaching centre is the brain child of Abhayanand, DGP, Bihar, who not only mentors the students but also teaches physics on weekends. Abhayanand also initiated the ‘Super30’ concept in 2002, to give free coaching to talented poor children.