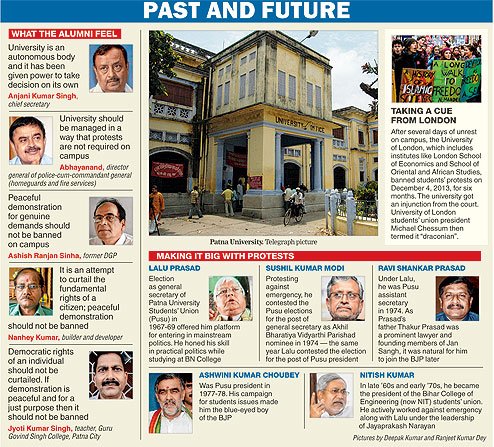 Students and teachers of Patna University are ready with protest plan against the ban on campus agitation.

The university administration on Saturday issued a notification banning all types of dharna, agitation, procession or strike on campus and if any student, teacher or non-teaching staff is found involved in any type of demonstration, disciplinary action would be initiated against such students, teacher and staff.

For students, the disciplinary action would be expulsion from the university while for teaching and non-teaching staff it would be removal from service.

Terming the university directive “dictatorship” by vice-chancellor Y.C. Simahadri, members of various unions have planned to create awareness about democratic rights that student have been guaranteed by the Constitution.

Raj Sinha, a third-semester student of Patna Law College, said: “On Monday and Tuesday, the students will create an awareness campaign about their demands and the recent directive.” Raj added that they would inform the students that the main aim of the unions — despite having affiliation to different social or political outfits — is to protect interest of students. The campaign will start from Patna Law College and will culminate at BN College.

Sources said the university is likely to witness stiff protests once the admission process completes by July 15.

Patna University dean of students’ welfare K.N. Paswan said: “The notification has been issued so that there is an improvement in academics at the university. Also, there are different channels functioning at the university through which teachers, students and non-teaching staff can air their grievances and should not go for dharna or agitation.”

Sinha said: “Riding the students’ politics wave, the university has produced many top leaders, including Lalu Prasad, Nitish Kumar and Sushil Modi.” Sinha was elected as Pusu president in the election held in 2012 after 28 years.

Not only students but also the Patna University alumni have condemned the directive. Ashwini Kumar Choubey, the Buxar MP who was Pusu president in 1977-78, said: “The directive is undemocratic as even the Constitution has laid provision under which an organisation can stage peaceful demonstration in support of their demands.”

The sources said while on one hand students are in no mood to bow before vice-chancellor Simahadri’s directive, some teachers who were more vocal in chanting democratic rights of students time and again have kept mum on the issue at present.

A senior teacher of Patna University who had earlier joined students’ demonstration on several occasions said: “I have neither seen the notification nor interested to say anything on the issue.”

Another teacher, who too was vocal sometime back denouncing the university on various issues, said: “A few months ago, I spoke about the deteriorating law and order at the university. Immediately after that, the authorities issued a showcause notice and since then I have decided not to speak anything.” Both the statements assume importance as neither Patna University Teachers’ Association nor the non-teaching staff association has condemned the directive. The directive also states that if any student has any grievances they are allowed to approach proper channels such as dean of students’ welfare who in consultation with the head of institution concerned will solve the problems.

Shiv Jatan Thakur, a teacher at Patna University, said: “Because of nuisance of some students, the academic atmosphere has deteriorated.” Supporting the university directive, Thakur said the university can order such a directive to improve law and order.