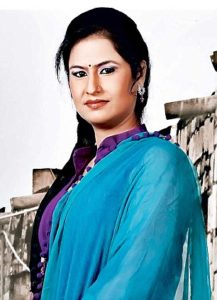 Unlike one tormentor usually seen in the movies, Bhojpuri actress and AAP candidate Rina Rani is facing three ‘bahubalis’ (musclemen) at the poll hustings in Bihar’s Maharajganj parliamentary constituency.

The 40-year-old actress, who has acted in Bhojpuri films such as Gundai Raj, Yadav Paan Bhandar and Apne Begane, is pitted against Prabhunath Singh of the Rashtriya Janata Dal (RJD), Manoranjan Singh Dhumal of the Janata Dal (United) and Lalu Prasad’s controversial brother-in-law Sadhu Yadav.

Sadhu is contesting as an Independent candidate.

If this was not enough for the AAP candidate, BJP’s former minister Janardan Singh Sigriwal is also contesting the polls in the Rajput-dominated seat.

Sigriwal wields considerable clout in the constituency where voting is scheduled to take place on May 7.

The three ‘bahubalis’ in the poll fray have been accused, over the years, in different criminal cases ranging from murder, attempt to murder, kidnapping for ransom, sedition, assault on IAS officers to possession of stolen property and narcotics-related crimes.

“I am not worried by the bahubali reputation of my opponents. Just as the hero or heroine gets the better of the villain at the end of a film, I will also defeat these bahubalis in the poll battle,” she said.

While her opponents contend that the AAP was drawing support in Delhi and some other big cities only, Rina said she was getting tremendous support from the rural voters of Maharajganj.

“I have been travelling non-stop from one village to another. The support I am getting is unbelievable,” she said.

“The people living in the remotest villages of Maharajganj are well aware of the aims and objectives of our party. They are all familiar with Arvind Kejriwal and appreciate his efforts to cleanse the political system in our country,” the AAP candidate said.

Rina, who has hit the campaign trail with gusto despite limited resources, said she was fighting the polls without any money or muscle power for some people-centric issues.

“I have promised to the electorate that I will work for the development of the constituency with a special emphasis on education, employment, health and woman empowerment,” she said.

“I have also promised to them of ensuring district status to Maharajganj.”

The AAP candidate faces an uphill task to deliver her promises to the people. The Maharajganj seat was won by the RJD’s Umashankar Singh in 2009.

After his demise a few ago, RJD candidate Prabhunath Singh won the last year’s by-election here. Prabhunath is being challenged by JD(U) legislator Dhumal and BJP MLA Sigriwal, who was earlier a minister in the Nitish Kumar government in Bihar.

Besides, Sadhu Yadav has also jumped on the poll bandwagon as an Independent candidate, making the multi-cornered fight tough for every candidate.

Rina, however, is hopeful that her clean image will translate into votes and force her rivals to bite the dust in the poll arena.