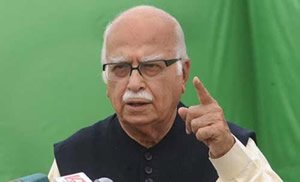 In an interview to The Indian Express ahead of the 40th anniversary of the Emergency, senior BJP leader LK Advani said “forces that can crush democracy” (in the country) are stronger.

BJP veteran LK Advani’s warning that an Emergency-like situation could return to India garnered support on Thursday among the Opposition who called it a veiled swipe at the prime minister but the ruling party dismissed the sidelined leader’s remarks.

Delhi chief minister Arvind Kejriwal, whose government is locked in a bitter tussle with the Centre over control of the Capital, said he supported Advani’s comments.

“Is Delhi their first experiment?” he asked, about a week after his party accused the Union home ministry of creating an Emergency-like situation in the city by arresting former AAP minister Jitender Singh Tomar.

Bihar chief minister Nitish Kumar said his state was facing such a situation on a daily basis and the Congress insisted Advani was hinting at Emergency returning under Prime Minister Narendra Modi’s rule.

“It is obvious who he is talking about, whose government is there, who the PM is. He knows it. But he is a statesman-like leader of the BJP. He did not want to name the Prime Minister. But whoever reads the interview, he/she would understand he is talking about Modi,” Congress spokesperson Tom Vadakkan said.

In an interview to the Indian Express newspaper ahead of the 40th anniversary of the Emergency on June 25, the 87-year-old BJP patriarch said fundamental liberties could be curtailed again because enough constitutional safeguards weren’t in place.

“The forces that can crush democracy are stronger. I do not say the political leadership isn’t mature. I don’t have faith because of its weaknesses.  I don’t have the confidence that it (Emergency) cannot happen again,” the newspaper quoted Advani as saying.

The 21-month period between 1975 and 1977 is often regarded as the darkest phase of Indian democracy that saw then PM Indira Gandhi suspend fundamental rights and crack down on the media and civil society, throwing thousands of Opposition politicians in jail to uphold her government. However, when the Emergency was lifted, the Congress was routed in the general elections and found itself out of power for the first time after independence.

The BJP quickly distanced itself from Advani, who has found itself increasingly sidelined with the rise of PM Narendra Modi in the party.

“I think Advanji was referring to institutions rather than to individuals. I personally don’t see any chance of emergency being re-imposed. I think that age is over, Indian democracy is too strong,” said BJP spokesperson MJ Akbar.

Advani, a firebrand leader who played a key role in the BJP coming to power in the 90s and was deputy PM under Atal Behari Vajpayee is now a part of a largely-powerless Margdarshak Mandal as critics say the veteran has paid the price for opposing Modi.