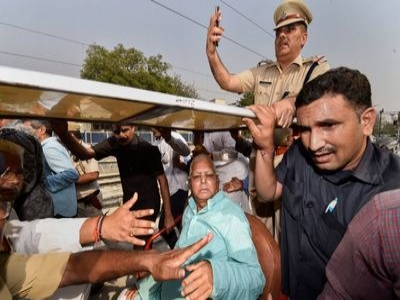 NEW DELHI: There was high drama at AIIMS on Monday over the discharge of RJD supremo Lalu Prasad, with his supporters creating a ruckus at the hospital alleging that he was being sent back as part of a conspiracy to kill him.

Lalu had been referred to the institute from the Rajendra Institute of Medical Sciences (RIMS), Ranchi, on March 29 with high blood sugar and infection. Last week, the treating doctors found him fit for discharge. Sources said the RJD leader, serving jail term in fodder scam cases, had sought time till Monday.

However, on Monday, when Lalu was being told to prepare for discharge, he wrote to the AIIMS director that he was still unwell. “I want to apprise you that I suffer from heart disease, kidney infection, sugar and many illnesses. I have back pain and repeated bouts of dizziness. I have even fallen in the bathroom several times,” the RJD president wrote.

He also mentioned in his letter, which was tweeted by his son Tejashwi Yadav, that Ranchi’s Birsa Munda jail (where he is lodged) and RIMS do not have facilities to treat kidney-related ailments and that AIIMS should not force him out under “political pressure”.

RJD chief @laluprasadrjd writes to All India Institute of Medical Sciences stating, 'I don't want to be shifted back to Ranchi hospital, as that hospital is not properly equipped to treat my ailments.

Who is forcing AIIMS administration to send him back? pic.twitter.com/gvOBmCUDpw

“If I am sent to Ranchi Medical College from AIIMS and it endangers my life, you will be held responsible for that,” Lalu said.

However, AIIMS maintained that he doesn’t have any serious medical condition. “He was referred from RIMS Ranchi with high blood sugar and infection. We constituted a board of senior faculty members from departments of medicine, surgery, cardiology, endocrinology and nephrology for his care. He was put on injectable antibiotics and then on oral antibiotics. His blood sugar was controlled and evaluation for cardiac and renal status was done. He showed significant improvement. He had no fever and his antibiotics were stopped,” said a hospital spokesperson.

The spokesperson said that the medical board met on April 28, reviewed his progress and decided that he was fit to be discharged. “However, due to his chronic problem of hypertension, diabetes and backache, he was advised to be on regular follow up and management at RIMS Ranchi,” he added.

The AIIMS’ evaluation didn’t go down well with the former Bihar chief minister’s supporters. Sources said eight to nine men barged into the institute’s cath lab when AIIMS director, Dr Randeep Guleria, was taking a round.

They shouted at him and when the security personnel tried to stop them, Lalu’s supporters created a ruckus. One security guard was injured in the process and the supporters broke the glass panel of the door of the AIIMS cath lab in the process, which prompted the institute to file a police complaint.

“Around 12.15pm, 8-10 unknown miscreants misbehaved with the AIIMS staff and created nuisance in the hospital area protesting against the discharge of Lalu Prasad, who has been under treatment at AIIMS and is being discharged today. They also damaged the glass door of the cath lab at the rear entrance, resulting in injury to AIIMS security guard, Khurshid Alam. With the intervention of security staff, the safety of AIIMS staff was ensured and crowd dispersed,” AIIMS deputy chief security officer Deepak Kumar wrote in the police complaint.

But the ruckus continued and Lalu left from AIIMS, along with dozens of supporters, around 3.25pm for the New Delhi railway station to catch a train for Ranchi.

Earlier in the day, Congress president Rahul Gandhi met the RJD chief at the institute and enquired about his health.

“Prime Minister Narendra Modi and the CBI are conspiring to kill our leader. They pressured AIIMS to discharge him against his wishes,” a Lalu supporter shouted.

The former Bihar chief minister has been convicted in four fodder scam cases since 2013, the latest being the Dumka treasury case, in which a special CBI court sentenced him to 14 years in jail.