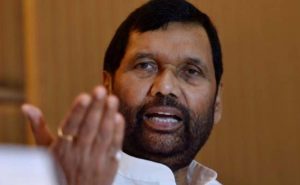 Patna: Against the backdrop of recent Dalit protests, political parties in Bihar appear to be in competition with each other to woo the community.And the most politically correct way of doing that seems to be offering tributes to Dalit icon Dr BR Ambedkar on April 14, his birth anniversary.

LJP chief and Dalit leader Ram Vilas Paswan has organised an event to mark the occasion. Mr Paswan will visit Patna on Sunday to review preparations for the event that will have Chief Minister Nitish Kumar as the chief guest.

Both the leaders are said to have met each other four times during the past month and Mr Paswan seems keen to get people from his sub-caste included into the category of Mahadalits in the state that will entitle them government benefits like student scholarship besides three decimals of land.

Paswans make up nearly 50 per cent of Dalits in Bihar. With general elections due next year, the union minister is keen on retaining his own vote bank, given the spate of protests earlier this week by the community and its anger the BJP-led centre.

In Bihar, where caste politics does matter, Nitish Kumar had created a Mahadalit category in 2006, comprising the most backward classes among Dalits. Mr Paswan had them staunchly opposed it, fearing it would split the Dalit vote.

The new-found bonhomie between the two leaders comes at a time Nitish Kumar is said to upset over the communal violence in Bihar during the recent Ram Navami celebrations and has acted tough against alleged trouble mongers, including some BJP leaders.

For the LJP event to mark Ambedkar Jayanti, an invitation has also been extended to Deputy Chief Minister Sushil Modi of the BJP to ward off any speculation of Mr Paswan creating a separate group within the National Democratic Alliance, the ruling coalition at the centre.

Sensing resentment among Dalits for the BJP, the main opposition party in Bihar — Lalu Prasad Yadav’s RJD — has decided to extend all support to any Dalit agitation in the future.

A letter by Mr Yadav, who has been sentenced to jail in corruption cases, was read out to all party legislators in a hurriedly called meeting in Patna on Thursday.

In an attempt to wrest his old Dalit vote bank, Mr Yadav has coined a new slogan — Jai Bheem, Jai Mandal, Jai Bahujan, Jai Hind. Stressing that the time has come for backwards and Dalits to come together, Mr Yadav asked his party lawmakers to visit Dalit-dominated areas on Ambedkar Jayanti to express solidarity with their cause.

Dalits are unhappy with a recent Supreme Court order they claim dilutes a law that seeks to protect them against atrocities.

Earlier this week, Prime Minister Narendra Modi had asked parties not to politicise Dr Ambedkar and had claimed that the BJP had given the father of the Constitution the pride of place that no other party did.