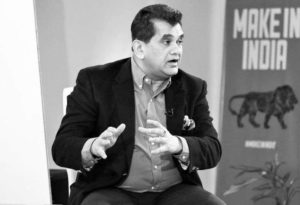 Patna: Chief Executive Officer (CEO) of Niti Ayog Amitabh Kant today charged media with presenting his distorted statement on Bihar, saying backwardness in some districts of the country existed since long and it had several reasons including low rating on Human Development Index (HDI).

Mr Kant, in his statement released here, said what he had said about backwardness of some states in the country, was misrepresented and distorted in media, deriving a complete different meaning, which he intended. Recalling his statement, the Ayog CEO said he had advised to push for improving the rating on HDI, as some states had performed well in improving its rating on ease of doing business.

Bihar has registered impressive economic growth in last few years and it is desirable that the state should achieve the goal of improving its rating on HDI as had been conceived in Akanchhi Zila Karyakram,” he noted.