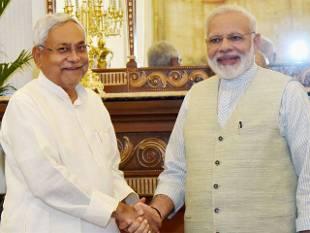 PATNA: A day after Telegu Desam Party (TDP) walked out from the NDA over denial of special category status (SCS) to Andhra Pradesh, another NDA ally JD(U) on Saturday said its demand for SCS to an underdeveloped state like Bihar was still alive and it would continue to struggle for the demand even in future.
“JD(U) have been struggling for special category status to Bihar under the leadership of CM Nitish Kumar for last several years. The JD(U) leadership has time and again been knocking the Centre’s door with the demand. A delegation of JD(U) will also meet the 15th Finance Commission and submit a fresh petition seeking special category status to Bihar,” JD(U) national secretary general K C Tyagi told TOI over phone from New Delhi.

Tyagi, however, made it clear that the JD(U), which is running government in Bihar in alliance with BJP, is still part of the NDA and it was not going to severe ties with the National Democratic Alliance on the issue of SCS, what TDP done on Friday. “We are also not going to support the no-confidence motion against Narendra Modi government brought in the Parliament by the YSR Congress and former NDA ally TDP,” he said.

To a question, Tyagi said every party had its own way to mount pressure on the government for fulfilment of any demand. “We will keep pressurising the Centre for SCS to Bihar. We also support the TDP’s demand for SCS to Andhra Pradesh. Like Bihar, Andhra Pradesh too deserve special category status. We will submit fresh petition to the Centre and 15th Finance Commission for consideration of SCS to Bihar,” Tyagi told TOI.

Recalling JD(U)’s continuance struggle for the SCS, Tyagi said Nitish Kumar had been pressing for the demand ever since he came into power in Bihar in 2005. “It was Nitish Kumar who got a unanimous resolution passed from both the houses of Bihar legislature in favour of the SCS to the state. Later, in 2013 JD(U) organised a massive rally at Delhi’s Ramlila Maidan to press for the SCS to Bihar. But the Raghuram Rajan Committee formed to look into the demand of SCS by new states, denied the demands,” he said.

Reacting over the RJD leader Tejashwi Prasad Yadav’s allegation that Bihar CM Nitish Kumar forgot the demand of SCS allegedly in the lust of power, Tyagi said Tejashwi’s allegation was ‘totally incorrect.’ Terming Tejashwi as his “dearest nephew” Tyagi said how could Tejashwi forgot the steps taken by Nitish for SCS to Bihar.

Earlier on Friday, the RJD took pot-shots at Nitish Kumar questioning his silence on the issue of SCS to Bihar and accusing him of having “sold” the interests of the people of the state in pursuit of power.

“Why is Nitish keeping silent on the issue of special category status to Bihar? What has happened to his inner voice?” a tweet from the official twitter handle of jailed RJD boss Lalu Prasad said. The twitter handle of Lalu, who is in Ranchi jail following convictions in fodder scam cases, is being managed by his associates.