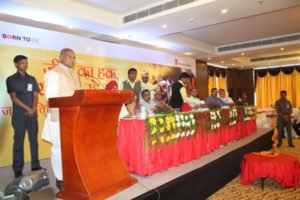 Patna: Save the Children hosted a political conclave – on the theme ‘No Child Born to Die’ — with elected representatives and political leaders from Bihar in the state capital today. The state leadership present at the event included Shri Jitan Ram Manjhi, Honorable Chief Minister, as the Chief Guest, Shri Ramdhani Singh, Honorable Health Minister, as the special invitee and over 20 Members of Parliament, Members of Legislative Assembly and Members of Legislative Council from across political parties. The chief minister highlighted the importance of tackling newborn deaths in the effort to improve child survival in the state. The political leadership actively engaged in the dialogue to end preventable deaths and each individual took the pledge for stepping up efforts in delivering the health services to every newborn and child in the state.

“The state has initiated various programmes to address the issue of child survival,” Manjhi claimed, and stressed the need to focus on the girl child, right from issues related to female foeticide to ensuring an equal opportunity for girls in the society. The chief minister read out a pledge for the audience, with which everyone present committed to make efforts for reducing newborn and child mortality.

The health minister added that “the issue of child and newborn survival is a serious concern and while Bihar has made considerable progress, we will continue to make efforts so that every child is safe.”

Save the Children acknowledged the significant efforts both by the national and state governments in prioritising maternal and child health to achieve path-breaking reductions in the India’s child mortality levels. “If we want to achieve MDG 4 by 2015, we have to focus on ensuring survival on the first day of birth,” Thomas Chandy, CEO of Save the Children stated, and added:  “Our “Ending Newborn Deaths’ report released in February this year revealed the true scale of the newborn crisis.   Without targeted action now, progress made in cutting child mortality will stall. Unless the situation of child survival improves in Bihar, India won’t be able to achieve the MDG.”

Bihar is now on the wings of change, having achieved one of the highest GDP growth rates in recent years. With ‘Manav Vikas Mission’ the state has created a model proving that social and economic development can and must steer together. In its mission to ensure ‘health for all’ Bihar launched a new campaign ‘Dus ka Dum, Swashthya Rahenge Hum’ – a 10 point agenda to improve the health care system in the state and to promote healthy practices among the people of Bihar.

Bihar has made commendable progress in reducing newborn mortality in the state achieving a dramatic reduction to 28 per 1000 live births better than the national average of 29.

Save the Children believes that with 14 lakh under five deaths every year, India is facing a silent emergency that the nation, states and civil society must wake up to.   With less than 600 days left to the MDG targets there is a need to bring a sense of urgency and trigger real action to address the issue of child health in the state. “Save the Children works closely with the government to support its initiatives,” said Rafay Hussain, Save the Children’s State Program Manager, “and that is why these deliberations with the political leadership are so important. He summed up, “The need of the hour is to work together with a common purpose to build an unstoppable momentum for lasting change for our children.”

Save the Children recommends:

Clearly, newborn survival must be a central element of the state’s agenda for improving maternal and child health to ensure that every child survives. It will be important for the government, NGOs and communities to come together to rapidly implement initiatives that reach out to the minorities and the most deprived sections of society.

Save the Children is India’s leading independent child rights organization. In India, we are working across 16 states to ensure that every child has a happy and healthy childhood.

Courtesy: Save the Children – India