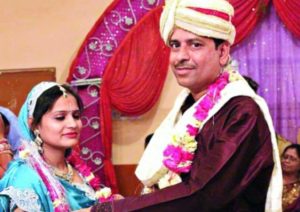 PATNA: A young married woman has sought divorce from her husband for his failure to stop loudspeakers blaring round the clock from a temple near his home in Vaishali district’s Hajipur, around 20km north of Patna, proving once again the old adage that fact is stranger than fiction.

Sneha Singh, a resident of Rajputana locality of Hajipur, the district headquarters of Vaishali, said on Tuesday that she had no option but to approach the local court for divorce from her husband, Rakesh Singh, after four years marriage due to his inability to curb noise pollution.

Sneha, a postgraduate law degree holder from an Uttar Pradesh institute, said that her husband, a former badminton player and physically challenged, failed to keep the pledge he took at the time of their marriage. “Rakesh has not kept his promise that he made during the wedding,” she told The Telegraph over phone.

Some antisocial elements, she alleged in her repeated complaints to the police, have installed loudspeakers near a temple around her residence and played religious songs at high volume round the clock.

“I have developed serious complications due to blaring of loudspeakers at high decibel 24×7,” she added. Her repeated requests – to the local police, the national human rights commission, and even the offices of the chief minister and the prime minister – have fallen on deaf ears.

“The temple near my house keeps on blaring several loudspeakers round the clock at high decibel making our life a hell,” she rued. “It is worthless to live with a man who can’t protect the dignity of his wife. So I have decided to get rid of this man and his family as he has expressed his helplessness to support me in the fight for justice. My life has turned into a hell due to noise pollution. I can’t live in such an environment,” she said.

Sneha said the problem started soon after she came to her in-laws’ after marriage to live with her husband, father-in-law and mother in-law, but for two years she remained silent.

“In March last year, I drew the attention of the local authorities, including the district magistrate (DM) and the superintendent of police (SP), towards the problem but to no avail,” she said.

She said a mob pelted her in-laws’ house was with stones after she lodged a formal complaint with the Industrial police station last year. She said the mob even tried to kill her.

“The police came after repeated calls to the offices and residences of the DM and the SP,” she said.

The police officials declared Sneha as mentally challenged and advised her father-in-law to send her elsewhere if he wanted to live in the locality. “It is torturous to call an educated woman like me mentally challenged. I have done LLM, LLB and obtained other academic degrees from reputable institutes. Though my in-laws’ have succumbed to the pressure of the anti-socials, I certainly will not, and will keep on fighting with them,” Sneha said.

She cited the text and WhatsApp messages she sent to the authorities concerned to express her agony and pain that she had to undergo for the past four years. She said she decided to snap all ties with her in-laws because she was fed up with the reluctant attitude of the officials. “If the authorities can’t give right to live with dignity, let them give the right to die,” she said.