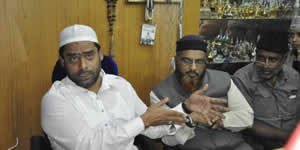 MIM senior leader and ex-Corporator Mohammed Ghouse said that MIM as “Modi in Mask” and Asaduddin Owaisi as “Junior Modi”.

He said MIM has contested elections in Maharashtra, Bihar and other places only to benefit the BJP and other communal forces. He said that the Congress would seek vote on the basis of development and not on religion. He said only Congress was capable of fighting with the communal forces. He also alleged that the MIM was against development of Muslim community and even opposed reservation for the community. However, despite opposition from MIM, the then Congress Government gave 4% reservation which benefitted nearly 10 lakh poor Muslims.

Ghouse, who was elected as MIM corporator in 2002 and 2009 from Charminar ward, came to Gandhi Bhavan in a massive rally from Charminar. He was given warm reception by senior Congress leaders including TPCC President N. Uttam Kumar Reddy, Leader of Opposition in Council Mohammed Ali Shabbir, GHCC Minorities Department Shaik Abdullah Sohail and other leaders. Along with Ghouse, hundreds of MIM workers also joined the Congress party today.

Explaining the reasons for his exit from MIM, Ghouse said that the party was indirectly working to benefit the communal forces. Stating that he had dedicated 30 years of his life for the MIM, he said the present leadership has deviated from the principles of late Sultan Salahuddin Owaisi. Without having any organisation or workers’ base, the MIM contested elections in Maharashtra while benefitting the BJP and Shiv Sena. He said he had refused to participate in Bihar elections campaign and the MIM leadership got upset when he burst crackers near Charminar on the defeat of BJP in Bihar elections.

Ghouse said MIM’s entry into Maharashtra, Bihar and Bengaluru was directed by Amit Shah. He said that the party did not go to Delhi or Jharkhand as BJP was already strong in those states.

He said almost everyone in the Old City was disappointed with the performance of MIM leadership and their secret ties with the BJP. He said many more leaders would join the Congress party soon.