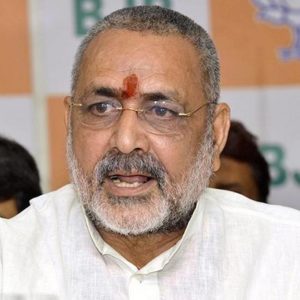 The MP from Nawada in Bihar said the two leaders were two sides of the same coin as they both keep sitting when the national song is played. “Both of them don’t show respect to patriotism, which is unfortunate,” Giriraj told newsmen in his parliamentary constituency.

Giriraj’s remarks came a day after a singer was allegedly asked to finish the national song in one line due to paucity of time at a meeting addressed by the Congress president at Bantwal in Karnataka on Friday.

A TV channel later aired a video footage in which Rahul was seen pointing to his wrist watch to party leader K C Venugopal allegedly to suggest that he was running short of time.

The minister, who inaugurated the ‘PM’s Sahaj Har Ghar Bijli Yojana’ and ‘Mukhyamantri Vidyut Sambandh Nishchay Yojana’ at the Town Hall in Nawada on Saturday, also lambasted the “candlelight brigade” over their mysterious silence on the recent rape of a 10-year-old girl in a madrassa in UP.