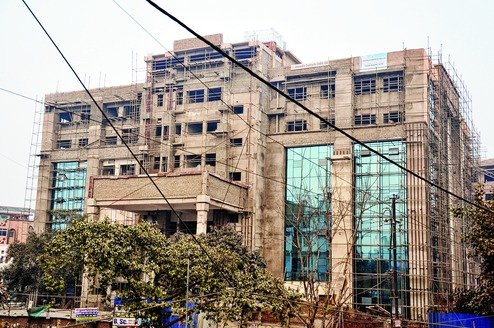 Patna: Bihar Police Bhavan – expected to be completed by March-end – is being built to withstand even an earthquake measuring 9 on the Richter scale. If such a string quake were to hit Bihar, the Bhavan would act as the “emergency operation centre”.

Features to make the Police Bhavan highly quake-resistant and have the emergency centre were incorporated on the directions of chief minister Nitish Kumar in consultation with his senior officials.

In addition, the basement plus ground plus six-storey building being readied at a cost of Rs 388 crore will also be the first in Bihar to boast of a rooftop helipad.

“Not only will the Police Bhavan be a thing to admire, it will serve as a nucleus point for disaster management in the state,” Nitish has said. “Even if an earthquake of 8 to 9 Richter hits Bihar, this structure will survive and disaster management work can be done from here.”

The worst quake to hit the state, on January 15, 1934, claimed around 10,000 lives even though there were only single or double-storey structures at that time.

The building construction department is overseeing the Bhavan work. Its chief engineer Kashyap Kumar Gupta told The Telegraph: “We have used ‘lead rubber bearing’ technique in this building and it can easily survive a 9 Richter quake. It is the sixth building in the country and first in Bihar to use this technology, incorporated in its foundation.”

The technology, which is a seismic isolation device, was invented by New Zealand scientist William Robinson. The technique works on the principle of base isolation and limits energy transferred from the ground to the structure during a quake. The bearings are made of laminated rubber and steel with steel flange plates for mounting the structure. All isolators have an energy dissipating lead core. The rubber in the isolator acts as a spring. It is very soft laterally but very stiff vertically. The lead core provides damping by deforming plastically when the isolator moves laterally during a quake.

“The emergency operation centre will be spread on three floors, from the first to the third,” department chief architect Anil Kumar said. “It will be state-of-the-art with space for disaster management employees, video connectivity with all districts with dedicated screens for each of them. The third floor will have a secure place from where the chief minister can keep a tab and direct officials across the state if any disaster strikes.”

Officials also pointed out that a rooftop helipad at the new police headquarters will facilitate easy movement of the chief minister, top administrative and police officials and commandos in case of an emergency. “The chief minister will have all facilities at his fingertips if he chooses to shift to the building to helm emergency command over the state,” an official said.

Once the new building is ready, the police headquarters will shift from the old secretariat, from where it has been functioning since 1905.