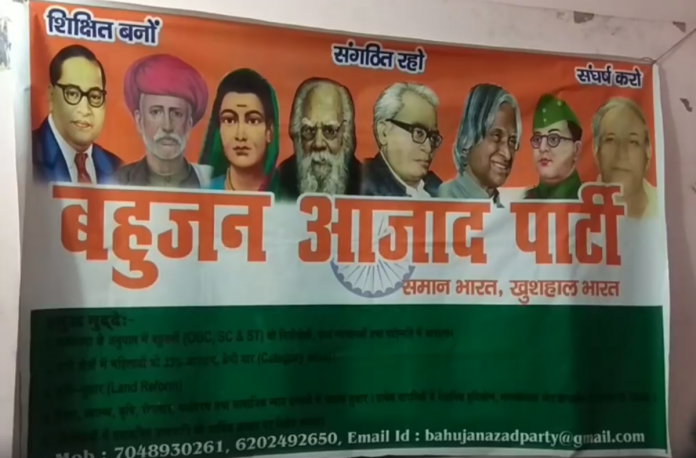 New Delhi: Move aside Arvind Kejriwal and AAP, a fresh group of IITians is preparing to launch itself into national politics.

A group of 50 alumni from the Delhi and Kharagpur IITs are set to launch a party to do what they say the Congress, the BJP and everyone else didn’t – “uplift the marginalised”.

They plan to call it the Bahujan Azad Party (BAP), and say it will be dedicated to fighting for the rights of Scheduled Castes, Scheduled Tribes, Other Backward Classes and women, who haven’t received their due in terms of education or employment.

Naveen Kumar, the president-in-waiting of the party, graduated from IIT Delhi in 2015 in textile technology. Most of the members, he says, come from the SC, ST and OBC communities.

“A number of us IITians are working actively for the formation of this party. We have applied to get it registered with the Election Commission, and we are expecting a response in the next 15 days. There are some 50 people who have left their jobs, and are working full time for the party. There are some others with us, some civil service officers supporting us from the outside, working like a think tank for us,” Kumar said.

“Since most of us come from SC, ST or OBC sections of society, we have an idea about the kind of situations these people have to face in various sectors, including jobs and education. The representation of OBCs is very bad in academia and the judiciary. We want to work towards bringing them at par with the general category.”

Venturing into mainstream politics, BAP plans to start its electoral journey with the assembly elections in Bihar in 2020, and then aim for the next general elections.

Kumar said they will not pit themselves as a particular party’s ‘rival’, as they only want to work for the upliftment of the marginalised, making education their main focus.

At present, Kumar said, they do not have any political backing, but some prominent community groups are supporting them.

“We have backing from some groups that work for the backward castes, but we cannot reveal their names yet, it’s too early for that,” he said.

Political analysts and Dalit rights activists welcomed the initiative, but also cautioned these young leaders to remember that their main objective is not to face giants like theCongress and the BJP, but to build confidence in their own bahujan samaj.

Analyst-activist-politician Yogendra Yadav said: “It is a highly appreciable step if a group of IITians want to join the mainstream politics and fight for the rights of Dalits. But they should remember why they are getting into politics – to fight for their own bahujan samaj and not with giants like the BJP and the Congress. If they are able to develop a relationship with their own community, it’s a great step.

“The fight always begins from the top. Kanshi Ram was also able to fight for the bahujan samaj because he was empowered. Empowerment is what the Dalit community needs right now.”

“People are not ready to discuss basic human rights in this country without getting irrationally political. If this group of IITians have the capacity to do that, it is fantastic,” Divakar said.

“However, we should not fall flat for them just because they are IITians. If they are able to work hand-in-hand with human rights groups, it is the best kind of effort, and like a breath of fresh air that Indian politics needs. I will do all I can to support them.”