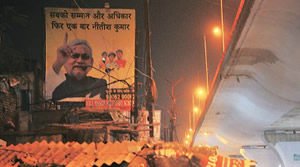 The ambitious campaign, designed by team that worked for Narendra Modi, will kick off on July 2, simultaneously from 10,000 locations in Bihar.

It is no coincidence that the large posters that came up to dominate Patna’s skyline earlier this month all feature the same photo of Nitish Kumar, as if caught mid-speech, against the same stark and uncluttered yellowish-green backdrop. Or that each carries one of six messages above the common tagline ‘Phir ek baar Nitish Kumar’. Or that none feature the JD(U) party symbol, or any reference to the JD(U)’s alliance with the RJD and Congress for the election due later this year.

These posters are an indication that it will be a carefully choreographed campaign for Nitish Kumar this time — designed around his persona, relegating his party and its alliance. At the end of it, it will frame the question and the choice for the voter as: are you with Nitish or against him? The lead choreographer of the Nitish campaign, Prashant Kishor, is already famous for directing the Lok Sabha campaign for Narendra Modi (his contribution to Modi’s 2012 Gujarat assembly campaign earlier is less known).

But if Patna’s posters suggest a similar strategy in terms of the presidential-style spotlighting of the Leader, the next phase of the campaign, to begin on July 2, is all set to underline the big difference.

Prashant Kishor’s next step, in fact the first full step after he moved into the Chief Minister’s residence on June 2 — and after his campaign for the government’s “Badh Chala Bihar” programme was stayed by the Election Commission on account of the model code of conduct in force for the ongoing MLC elections — will be “Har Ghar Dastak”.

The ambitious door-to-door campaign will be kicked off at 10:30 am on July 2, simultaneously from 10,000 locations in the state. In 30 days, 1 crore households, or roughly 3 crore voters, will be targeted.

This will involve “no high technology, no data, not even a pamphlet”, says a source. JD(U) workers will knock on doors, armed with precisely four talking points: Do you think Bihar has seen vikas or progress in the last 10 years? Have you or your community gained? Is Nitish the hero of this change, does the credit go to him? If it is so, wouldn’t you consider extending your support to him? Then, they’ll leave, after pasting a Nitish campaign sticker on the main door.

Nitish himself will knock on the doors of 10 homes in Patna on July 2. And that sums up the difference between Brand Nitish and Brand Modi, as crafted by Kishor.

Sources say that the Nitish campaign will be the antithesis of what people might expect after the Modi campaign starring Modi in 3D. “Modi was told then that he could not be packaged as the Vajpayee of the BJP, but as its Indira (Gandhi). Now, it would be a disaster if Nitish were to be projected like Modi,” says a source.

So, who is the target audience of the Nitish campaign? It will seek to appeal to all those, it is being said, who did not fall into the Modi wave in 2014. “Those who didn’t like the tall claims and the authoritative leader who is omnipresent and has all the solutions. Those who were repulsed by the 3D drama. Those who want their leader to be humble, not big, mighty, or macho.”