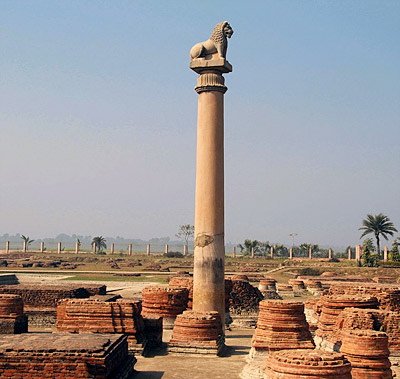 PATNA: Senior BJP leaders in Bihar celebrated what they called the 2,323rd birth anniversary of emperor Ashoka in Patna earlier this month and equated Prime Minister Narendra Modi to the emperor.“Just like Ashoka, Narendra Modi is an all-conquering Chakravarti,” said Deputy Chief Minister Sushil Kumar Modi. For the last three years, the BJP, brushing aside the claims of historians, has been hailing Mauryan emperor Ashoka as belonging to the Kushwaha caste, the second largest OBC group in Bihar which accounts for about 9 per cent of the total voters.

Despite historians maintaining that nothing about the date or place of birth of Ashoka has been found in recorded history, ruling BJP continues to celebrate his birth anniversary with an eye on the votes of the Kushwaha community that believes the emperor belonged to this caste. With Ashoka’s sprawling empire, which covered almost the entire present-day India and stretched from Afghanistan to Bangladesh, matching with the BJP’s idea of ‘akhand bharat’ (undivided India), the emperor has been the party’s newfound favourite in Bihar since 2013.

It all began around the time the then Gujarat chief minister Narendra Modi was declared BJP’s prime ministerial candidate. Surajnandan Kushwaha, a BJP legislator and national president of Rashtravadi Kushwaha Parishad (RKP), organised ‘Maurya Yatra’ across the state in 2013. The BJP-affiliated RKP claimed in early 2014 that the kings of the Mauryan dynasty belonged to the Kushwaha caste. With the community’s political support being divided between RJD and Union minister Upendra Kushwaha’s Rashtriya Lok Samata Party at that time, BJP leaders apparently hoped celebrating emperor Ashoka’s birth anniversary and stressing on his Kushwaha caste would help bring the community’s votes to its kitty.

BJP began celebrating Ashoka’s birth anniversary on Chaitra Shukla Ashthami in 2015. Even as no authentic photograph of Emperor Ashoka was available anywhere, Union Minister Ravi Shankar Prasad released a `5 postal stamp bearing an image of the Maurya dynasty ruler in August 2015. Not to be left behind, the Nitish Kumar-led government (in a grand alliance with the RJD and the Congress) declared Chaitra Shukla Ashthami as a public holiday later that year, hoping to win back the support of the Kushwahas. The government also issued a notification to all urban local bodies to build a ‘Samrat Ashoka Bhavan’. Historians have categorically said that putting a year as Emperor Ashoka’s birth, giving him an image and assigning a caste to him are “modern concoctions” and must be avoided.

According to Nayanjot Lahiri, a professor of history in Delhi University, Ashoka’s epigraphs are the only written version of events in his lifetime and they do not mention his date or year of birth. Eminent historian Romila Thapar, had earlier dismissed these efforts as “baseless”.However, Surajnandan Kushwaha, who is also a history teacher at Guru Gobind Singh College in Patna, is adamant. “Ashoka hailed from the Kushwaha community. Many generations of people from the Kushwaha community have passed on this fact and they regard him as one of them. Left-leaning historians have omitted this fact,” he said.