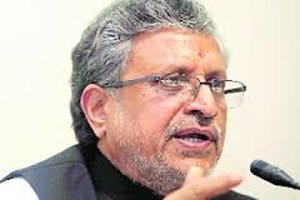 Two days after Bihar Health Minister Ramdhani Singh’s daughter was forced to resign as a librarian of a Patna hospital, he alleged that BJP leader Sushil Kumar Modi’s wife had got a job as a lecturer on the basis of a “fake experience degree”. Singh said he would come out with documentary evidence soon.

The BJP leader, who had demanded the health minister’s resignation for “illegally favouring his daughter, for getting the job at age of 37 against prescribed norms”, said the Nitish Kumar government had been making baseless allegations against his wife Jessy George out of political ill-will and to seek revenge for the embarrassment caused over Ramdhani Singh’s daughter Anita’s resignation from Indira Gandhi Institute of Medical Sciences.

Modi said: “It is a JD(U) government. Singh is free to conduct probe into my wife’s degree.”

The issue about George’s degree had also been raised by RJD a few years ago soon after her appointment at a Patna college.

The matter was later referred to vigilance. The then vigilance SP A K Verma had probed Modi’s wife and a few others’ degrees, but the probe remained inconclusive.

BJP leaders had alleged that the health minister’s daughter was the only person appointed about two months ago at IGIMS after over 25 candidates were shortlisted and interviewed. They alleged that there was clear “sign of favouritism”. The health minister, however, said: “It is the IGIMS director who should be asked about the selection criteria and the appointment of my daughter.”

Singh said he had already asked officials to look into Modi’s wife’s degree.

“Just wait for a few days, I will come out with full details on George soon,” Singh said.