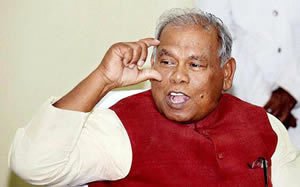 How will the presence of former Chief Minister Jitan Ram Manjhi in the Bharatiya Janata Party-led National Democratic Alliance affect its performance in the forthcoming Bihar election? This is a question that’s troubling the BJP leaders in the state, particularly because of the manner in which the alliance is being struck by saffron party president Amit Shah. Will this be another Kiran Bedi moment for the BJP, the local leaders are wondering.

In January, in the midst of the campaigning for Delhi assembly election, former IPS officer Kiran Bedi was parachuted in to lead the BJP from the front following a meeting with Shah. Local BJP leaders, including state party chief Satish Upadhyay, were kept out of the loop, and the decision was taken by Shah in consultation with Union Finance Minister Arun Jaitley and Prime Minister Narendra Modi.

That judgement didn’t really pay off and the BJP was routed in the capital. Still, it gave party members hope that Shah would be more democratic while making decisions in future for a state unit heading into election.

A few months later, his decision-making process hasn’t changed that much, complain Bihar BJP leaders, citing Shah’s meeting with Manjhi on June 11. They say Shah appears to be single-handedly making decision for Bihar, just as he did for Delhi.

It is for this reason that many BJP leaders in Bihar felt a sense of unease when Manjhi told mediapersons in Delhi after his meeting with Shah: “We will fight together. Defeating the unholy alliance of Lalu Prasad and Nitish Kumar in Bihar is the main issue for us and the BJP.”

According a senior leader in BJP’s Bihar unit, Manjhi could have been more useful for the party if he didn’t join the NDA, and instead fielded candidates in all the constituencies where Mahadalits have significant presence. For, whatever votes Manjhi’s party gets would be a direct loss for the BJP’s opponents and a direct gain for the saffron party, he argued.

“Manjhi is a controversial figure,” said the BJP leader. “He made several controversial remarks when he was chief minister. These remarks would become our baggage if he becomes part of the NDA. Moreover, even if one accepts that the candidates of his party would get some Mahadalit votes, it is hard to believe that he can succeed in getting these votes transferred to his allies, whether the BJP or other NDA constituents.”

Another BJP leader was even more critical about the way Shah met Manjhi. “What happens if this alliance harms the party?” he said. “Who will take the responsibility? Won’t Manjhi simply walk away if he doesn’t get what he wants from the party as Kiran Bedi did after the Delhi elections?”

Manjhi may well have won over a section of Mahadalits, the poorest among Dalits in Bihar. But it will be a great deal harder for him to win over all or a significant section of the Scheduled Castes, especially since he will be contesting against a front that is being led by Chief Minister Nitish Kumar, who is credited to have brought Mahadalits to the centre of the state’s politics.