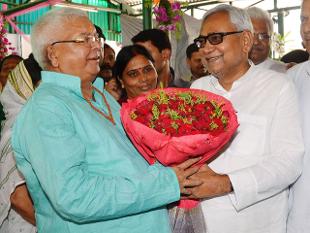 NEW DELHI: Months ahead of Bihar Legislative Assembly election, JD(U) and BJP today took jibe at each other and pointed out each other’s weaknesses.

Mocking BJP’s harsh defeat in Delhi elections, JD(U) General Secretary K C Tyagi said, “BJP does not have anyone to stand opposite Bihar Chief Minister Nitish Kumar. May be they are looking for a Kiran Bedi in Bihar too, but let me tell you, even that candidate will face the same defeat as Bedi did in Delhi.”

Actor-turned-politician Shatrughan Sinha had recently said it would be better if BJP goes to Bihar elections with a Chief Ministerial candidate to take on Nitish Kumar who is named by Secular Alliance as its nominee.

“It will be better if BJP Parliamentary board names a general who would lead the troop in the battle (Bihar poll),” Sinha had said.

“I want to ask BJP leader Sushil Kumar Modi, who will be the face of BJP in Bihar? Even Shatrughan Sinha has asked the same question. The party doesn’t has any candidates that is why it is saying that Prime Minister Narendra Modi is the face of Bihar elections, I just want to ask, will Modi resign and take over as Bihar CM?

Tyagi believes that the JD(U)-RJD alliance is more than enough to give BJP a tough competition, he further said, Modi’s popularity has declined considerably and the strength of our alliance is stronger than ever.

On the other hand, BJP labelled JD(U)- RJD alliance a “convoy of corruption” formed just to gain political muscle.

Union Minority Welfare Minister Mukhtar Abbas Naqvi said, “that this alliance is a convoy of corruption, that came into being just to grasp political power, public will gain nothing from it.”

Although, JD-U MP Ali Anwar Ansari said that his party is a peace-loving party but if someone tries to spread hatred or divide people, we will never let them succeed.

We will not let BJP to defeat us, we will take all the precautions to not let them win, he further said.

The Bihar legislative assembly elections are due in 2015 as the tenure of the current Legislative Assembly of Bihar expires on November 29, 2015.