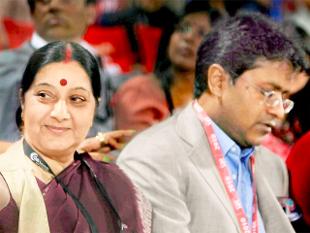 The Congress on Monday questioned Prime Minister Narendra Modi and BJP president Amit Shah’s connections with former IPL chief Lalit Modi while accusing the government of “aiding and abetting” his travel to and from his “hideout.”

Congress chief spokesperson Randeep Singh Surjewala said External Affairs Minister Sushma Swaraj had committed the crime of abetment under the Indian Penal Code and an FIR should be registered against her for helping the former IPL official procure travel documents out of the U.K.

“What is humanitarian about facilitating the return of a fugitive to his hideout?” Mr. Surjewala questioned, adding that Ms. Swaraj should have instead ensured that Mr. Lalit Modi return to India from Portugal rather than back to the U.K.

The Congress also accused the government of not pursuing the case for cancellation of Mr. Lalit Modi’s passport once it fell through at the first stage in the court.

Mr. Surjewala said, the Prime Minister “needs to explain his conduct,” while releasing undated pictures of Mr. Modi and Mr. Shah with the former IPL boss, on the sidelines of a cricket match. He termed Mr. Lalit Modi a “fugitive involved in money laundering, betting and hawala transactions worth Rs. 700 crore according to our agencies.”

The Prime Minister would have to answer whether there was any quid pro quo, he said.

“There are serious doubts about the role, knowledge and complicity of the Prime Minister. He has maintained a studied silence while he tweets on everything every day.”