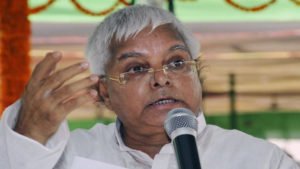 The provisional bail, which was earlier granted by the court to Prasad on medical grounds, was set to expire on July 3.

However, the court has now decided to extend the same till August 17.

“The doctor had advised my client to rest for three months. We had already gotten a provisional bail for one week and now the court has extended it for six more weeks. We’ll apply for a further extension if required,” said Prasad’s lawyer.

Earlier this month, the Rashtriya Janata Dal (RJD) Chief returned to Patna from Mumbai, where he was undergoing treatment for his heart-related problem.

Prasad has been convicted in four cases in connection with the multi-crore-rupee fodder scam.

The aforementioned case was registered by the CBI on April 15, 1996, in compliance with the orders of the Patna High Court.

It involves the fraudulent withdrawal of Rs 34.91 crore from the treasury of Dumka district in undivided Bihar between 1991 and 1996.