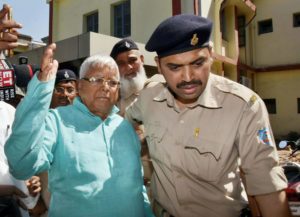 Ranchi, May 14 RJD president Lalu Prasad returned to Birsa Munda jail in Ranchi this evening after the completion of the three-day parole granted to him by prison authorities to attend the wedding of his elder son Tej Pratap Yadav.

The execution of a six-week provisional bail granted to him by the Jharkhand High Court last week would depend when the order reaches the special CBI court conducting the trial.

Prasad reported back to the jail authorities on the end of the parole, RJD general secretary and Prasad’s aide Bhola Yadav told PTI.

Prasad returned to Ranchi from Patna by an evening flight and went straight to the jail, Yadav, who accompanied him, said.

Jail sources said Prasad was sent to a prison ward.

The jail authorities had granted the three-day parole to the RJD chief on May 10 to attend Tej Pratap Yadav’s wedding in Patna on May 12. Travel time was not included in the duration of parole and hence Prasad returned to the prison this evening, whereas his parole ended yesterday itself.

Meanwhile, the process for execution of a provisional bail granted to Prasad by the Jharkhand High Court on Friday would start in the Special CBI court, which is conducting the trial, once the order reaches there.

“We are waiting for the HC order to reach the trial court to do the formalities for execution of six-week provisional bail,” Prasad’s lawyer Prabhat Kumar told PTI.

“We checked for the order but got the information that it has not reached the trial court till this evening. We are hopeful that it reaches tomorrow,” Kumar said.

He said they needed to fill the bail bond and deposit two sureties of Rs 50,000 to get the release order from the trial court on the basis of the hicgh court judgment.

Justice Aparesh Kumar Singh had granted a six-week provisional bail to former Bihar chief minister Prasad on medical ground on May 11 after hearing all the three fodder scam cases in which he is convicted.

The bail in the three cases – Chaibasa, Dumka and Deoghar treasuries – would be effective from the day he is released from jail.

Bhola Yadav said Prasad would likely return to Patna after completing the formalities for the provisional bail.

From there, he would go to Delhi, Mumbai and some other places on the advice of doctors for specialised treatment.

The over Rs 900 crore fodder scam cases are related to illegal withdrawal of money from government treasury by the animal husbandry department in undivided Bihar in the 1990s, when Prasad was the chief minister.