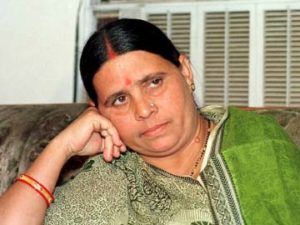 Annirudh Prasad, more infamously known as Sadhu Yadav, former MP of  Rashtriya Janata Dal, or the RJD, will challenge his sister Rabri Devi, as an independent from the Saran Lok Sabha constituency, in what is seen a declaration of an open war against Lalu Prasad’s family.

Sadhu’s entry into the electoral arena could spell trouble for Rabri Devi, former chief minister of Bihar, in Saran. He has the potential of splitting the Yadav vote, and could mar his sister’s plans to enter the Lok Sabha for the first time. The BJP has fielded its general secretary Rajiv Pratap Rudy from the constituency.

Lalu has fielded his wife from Saran, and his oldest daughter Misa Bharti from Pataliputra, where she faces another formidable opponent, former RJD MP Ram Kripal Yadav, described as her “uncle” by Mrs Bharti.

Sadhu, the controversial brother-in-law of the RJD chief, has criminal and corruption cases pending against him. He is presently out on bail in a case registered against him for allegedly assaulting the then transport secretary, NK Sinha in his Patna office January, 2001. He was elected as an RJD MP from Gopalganj in 2004, but revolted against the party for denying him a renomination from a constituency of his choice after Gopalganj was declared as a reserved seat in the delimitation exercise.

Sadhu joined the Congress soon after, and was conferred a ticket from the Paschim Champaran seat in the 2009 Lok Sabha polls. He lost the election. He tasted defeat again in the assembly elections held in Bihar in 2010, and has been in political wilderness since then. More recently, in a headline-grabbing action, he met Gujarat chief minister Narendra Modi in his Gandhinagar office in August last, and lavished praise on him for being “more qualified” than Congress vice-president Rahul Gandhi for the prime minister’s post.